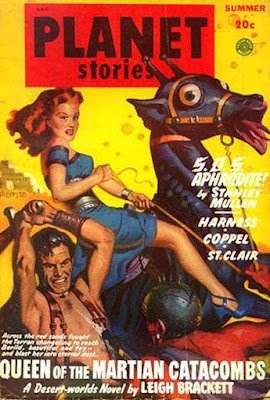 Since the hundredth anniversary of Leigh Brackett's birth was earlier this week, I wanted to write about something of hers. So I read a novella I'd never read in its original form (more on that later), "Queen of the Martian Catacombs", which originally appeared in the Summer 1949 issue of PLANET STORIES and has since been reprinted numerous times.

Brackett was famous for a lot of things, of course, including her science fiction. She contributed to the scripts for several iconic films, wrote some well-regarded mystery and Western novels, and was married to another great science fiction writer, Edmond Hamilton. Picking her best work out of a long and splendid career is probably a matter of personal taste more than anything else. A lot of people are fond of her science-fantasy (just like it sounds, a mixture of science fiction and fantasy), and I'm one of 'em.

"Queen of the Martian Catacombs" is an important story in Brackett's career because it introduced Eric John Stark, her most famous series character. Stark is an Earthman, but he was orphaned at an early age and raised on Mercury by a band of the primitive indigenous people who lived there. His Mercurian name is N'Chaka, meaning Man Without a Tribe. It's a Tarzan-like origin that serves as back-story here. Stark has become a pretty shady interplanetary character, being mixed up with gun-running and smuggling and serving as a mercenary soldier on several different worlds. (This is the old-style SF, where several of the planets in the solar system are inhabitable and have their own native races.)

In this one, Stark is drafted by an old friend who works for the Terran government to infiltrate a rebel group planning to start a war on Mars. Some of the barbarian tribes are about to rise, fueled by a leader who claims to have the secret of the ancient Martian mind transference process. Stark is one of the mercenary captains hired to lead them, but actually his job is to expose a plot rife with double- and triple-crosses and prevent the rebellion.

In reading this novella, I was struck by how much the intrigue reminded me of Robert E. Howard's El Borak stories. Brackett was influenced by both Howard and Edgar Rice Burroughs, and you can sure see that in "Queen of the Martian Catacombs". It races right along with beautiful women, blood feuds, scientific mumbo-jumbo, sand storms, and some beautifully described settings. Brackett often manages to be hardboiled and poetic at the same time. This is just a wonderful story, one of the best pieces of fiction I've read this year. 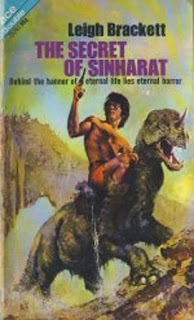 "Queen of the Martian Catacombs" was expanded into the novel THE SECRET OF SINHARAT, which was published as half of an Ace Double. According to my friend Morgan Holmes, Edmond Hamilton did the expanding, which I guess makes the novel version an uncredited collaboration between Brackett and Hamilton. I read that version more than thirty years ago and remember nothing about it other than that I liked it. But it's hard to imagine that it could beat the original novella.

Now, in the spirit of full disclosure, I should mention that I also read Brackett's post-apocalyptic novel THE LONG TOMORROW, in which the United States returns to an agrarian society following a nuclear war. I didn't care for it. I thought it was slow and dated and I never really bought the premise. It's certainly not terrible, but gee, "Queen of the Martian Catacombs" is so much better. This could well be because at heart I'm still a 12-year-old boy (as if you haven't long since guessed that, what with all the posts about monster movies and comic books and pulps), and 12-year-old me would have gobbled down this Eric John Stark yarn in one breathless gulp. At this late date, I doubt if I'm going to change...so I might as well enjoy my lingering adolescence.
Posted by James Reasoner at 6:00 AM

Thanks for the post, James. I've not read the original version, but I did read the expanded version when I was in high school. I'd never heard that bit about Hamilton expanding the story. Did Morgan say where he got the piece of information?

I'm trying to read a lot of Brackett this month. I may have to add this one to the list.

but I don't know where he got the information. Certainly seems feasible, though.

I'm a big fan of her work and have been for more years that I want to think about. Personally I don't think she was capable of writing a bad story. I was very fortunate to meet her back at the 1970's when she showed up at Pulpcon. Was a nice lady she was.

I read all of Leigh Brackett's work that ACE Books published back in the Sixties. Loved her work. And, I read all of Edmond Hamilton's ACE books, too. Terrific stuff!

I've been reading the ACE collection of hers called The Coming of the Terrans. Love it!

Great piece. I've been wanting to dive in on the Stark stories. Now I know where to start. There's also this new book: http://www.haffnerpress.com/book/stark/

Except for the Ginger Star trilogy, which I liked a lot, I'm woefully under-read on Brackett. I have a couple of things here, but need to get to them.

I have The Secret of Sinharat but I don't know if I have the original "Queen of the Martian Catacombs."

What book did you read it from? (Thanks)

(I think my comic shop might have the reproduction of the PLANET STORIES issue, I should get that.)

It might be available in one of the Baen collections.

Paul, the entire issue of PLANET STORIES with this story is available online at Internet Archive.

Paul,
I read the story in the big collection SEA-KINGS OF MARS, which has all the Eric John Stark stories as well as a bunch of Brackett's other early stuff, and a few later stories. It's part of the Fantasy Masterworks series published by Gollancz and is a very nice edition. I found it as a remainder at Half Price Books a couple of years ago. In the afterword by editor Stephen Jones, he also mentions the theory that Hamilton expanded the novellas for the Ace Double novels but doesn't cite any source. I noticed that when I was looking through it again this afternoon.

Once I've read all three novellas, I plan to find the three Stark novels, which I used to own in the original Ballantine editions but never got around to reading.

I will hunt down a copy.

John L. Carr's LEIGH BRACKETT: AMERICAN WRITER was the source that Edmond Hamilton expanded the two Stark on Mars adventures. The Secret of Sinharat was not expanded very much from the original PLANET STORIES version. People of the Talisman was expanded about 40 or 50% by my guess. I read the two Planet Stories versions and compared them to the Ace Double.

I've enjoyed this discussion about Leigh Brackett and PLANET STORIES. I too met Brackett at an early Pulpcon and got a chance to talk to her about her pulp detective fiction. She was amused to find a fan who did not ask her about her SF.

Concerning PLANET STORIES, it's been a long time favorite of mine and I'll have to read my copy of the Summer 1949 issue.

Morgan,
Thanks for the info about Carr's book. I may look for a copy of it.


i'm intrigued and this issue planet stories is available in good shape for little cash, so i'll explore this.

speculative pulp related, i just finished up two issue of weird tales---what an inconsistent magazine that is.

may 1932 was very good, actually the single most consistent issue i've read, with fun tales by hugh b. cave and the robert e. howard and some gorgeous ca smith prose, and a real conceptual stunner by david h. keller called 'the last magician'. but then the march 1934 issue was mostly mediocre and poor--the two longest stories were both tedious duds--the dyahlis cover story and the awful william hope allegory, virus of hell. the robert e howard, ca smith and anthony m rud tales help the issue--especially the reh valley of the worm---but these account for only about 25% of the pages in a not good issue.
i've found it's always an expensive crapshoot with this mag, even with the lovecraft, ca smith, re howard, wandrei, jacobi, hugh b cave tales that should make it more of a 'sure thing.'

so now i've moved to something more consistent...adventure, the jan 3 1920 issue recommended by mr. walker martin...

I read that same Ace double back in 1985. I'd already devoured the Skaith books. What a thrill. I think your EJS/El Borak analogy has some merit. Hadn't thought of (nor heard of) that angle. Seems obvious now. There's a bit of the "Half-breed Injun Renegade" (as seen in ERB's "Apache" novels as well.

Over the years, I've read various hints/accounts that Leigh and Ed sometimes worked on each other's stories.