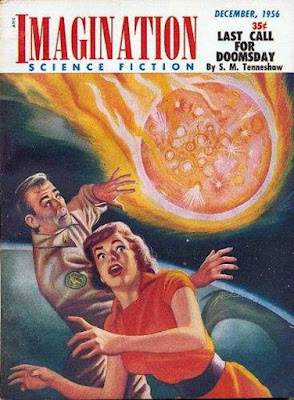 I wrote about Leigh Brackett last week, so it seemed fair to read something by her husband Edmond Hamilton this week. LAST CALL FOR DOOMSDAY is a short novel that first appeared in the December 1956 issue of IMAGINATION under the house-name S.M. Tenneshaw. It uses the old plot of an asteroid closing in for a collision with Earth and the efforts to evacuate the planet's population, in this case to a colony that already exists on Mars.

Instead of focusing on the evacuation, though, Hamilton centers his story on those who don't want to be evacuated and who, in fact, believe that the whole thing is a hoax and Earth won't be destroyed. The astronomer who discovered the asteroid that's on a collision course has disappeared, and the novel's protagonist, an Earth official named Jay Wales, is given the job of finding him so he can convince the holdouts to go ahead and leave. Wales soon discovers that there's more going on than there appears to be, and he has to untangle a dangerous plot to get to the truth.

Even though Hamilton had been a very successful author of science fiction for more than a decade before he ever met Brackett, he credited her with making him a better writer, and I think he was correct. LAST CALL FOR DOOMSDAY has the great narrative drive of Hamilton's pulp work, but it also has decent characterization and some passages that are both poignant and evocative. Hamilton has long been one of my favorite SF authors, and while this novel may be one of his minor efforts (because it lacks the epic scope of his best work), it's still well written and quite entertaining. It's been reprinted as part of the Armchair Fiction line under Hamilton's name, and if you're in the mood for some fine SF adventure, it'll do very nicely.

Was unaware of this one. Will have to track a copy down.

Quite few Hamilton yarns in this magazine and also Imaginative Tales. Edmond was the main reason I bought these magazines back then.

Excellent review, James, esp your note about Leigh Brackett. I bought every issue of Imagination and Madge Tales from 54 on. No wonder Im so crazy. :).

I like Hamilton although he's not my favorite, and no Leigh Brackett. I do think she probably helped him though.

Those Armchair doubles look fun. I have a couple of their HORROR GEMS anthologies. I'd like to see a little more informative introductions. They mostly just package the public domain stories and nothing else. No frills. But, nice packaging and you can at least get the stories, so I can't complain too much.

Wonder why it appeared as a Tenneshaw story...Hamilton's name was certainly a draw.

Not because there was another Hamilton in the issue, at least...

This seems like a potentially cool tale--facing planetary threats in this kind of situation can be interesting. Donald Wandrei handles a different variation on the meteor threat very poetically, intelligently, and wonderfully in Black Fog, which ranks up there with The Dunwich Horror and The Wendigo as perhaps my favorite short story ever.

I have limited exposure to Edmond Hamilton, and only through Weird Tales, where I found even his short work repetitive--- 'The Man who Returned" and 'Thundering Worlds; were both obvious tales that grew tedious as they churned though similar events, though I did very much enjoy his wacky sci-fi extrapolations in his Burroughs styled Uranus adventure, "The Terror Planet." What is generally considered Hamilton's best work in Weird Tales and afterwards?

Todd,
I wondered the same thing. Was there ever any rhyme or reason behind which house-names went on which stories in Hamling's digests and the Ziff-Davis pulps? Earl Kemp might know.

I think "What's It Like Out There?" is regarded as one of his best stories. I like just about everything in this collection, though.

Thanks for the information!

These later space opera tales for Hamling are something special. A seasoned veteran doing intelligent adventure fiction is a thing to see. Hamilton went through many phases but this is one of my favorites.