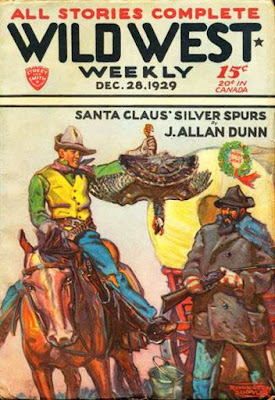 The Christmas issue of WILD WEST WEEKLY from 1929, with several Christmas-themed stories inside including two by J. Allan Dunn, a Bud Jones yarn under his own name and a Whistlin' Kid story as Emery Jackson, and a Kid Wolf story by Paul S. Powers writing as Ward Stevens, to boot. Quite a few of the Street & Smith pulps published Christmas issues.
Posted by James Reasoner at 6:00 AM

The special holiday issues often had excellent stories especially around Christmas and New Year's eve. WESTERN STORY and DETECTIVE STORY especially had great covers to go along with the stories. Jack Deveny, who was a pulp collector and dealer, used to send Christmas cards with pulp covers to all his friends and customers. I still have around a dozen of his Christmas cards in my pulp library.

Walker,
I remember those Christmas cards from Jack Deveny. I always looked forward to seeing what he would come up with each year. What a great guy he was.

Here's a Jack Deveny story that I've told before but it bears repeating. One year in the 1980's, as we approached the Holidays, Jack wrote to me and asked if I had a Christmas themed pulp that I could lend to him for his annual Christmas card. He had exhausted his supply and needed one that he had not used before.

I said I'd send him one and I went through my collection of Street & Smith and Munsey titles. I not only found one but I found a box full which I then sent to Jack on loan. That box lasted him to his death and each Christmas I was happy to receive his card and think that I played a part in the Christmas spirit.

Sounds like a Christmas story from the pulps, right? But I have to admit that while I could send off a box of my pulps on loan back then, many years ago, now I shudder at the thought of taking a chance what with the mail service that we have now. I'd be a nervous wreck waiting for my pulps to be safely returned. I don't think I could do it...

Bruce, you probably shouldn't encourage me because then I'll start firing out stories about the old time collectors. Here's another story about Jack Deveny:

Jack and his wife always had a dealer's table at the old Pulpcon conventions with the emphasis on the hero pulps and G-8 and HIS BATTLE ACES. G-8 was an aviation pulp published by Popular Publications for around 110 issues and 10 years in the thirties and forties. The stories were known for the weird menace plots and crazy covers.

When I first met Jack I didn't know anything about him but I was puzzled about his obvious love for G-8. The stories were terrible but Jack had read them as a child and loved them so much that when he grew up he became a commercial airline pilot.

One time while flying over Trenton, NJ in the 1980's, the phone rang and it was Jack calling to say hello. The call was probably against airline regulations but like many of us, Jack was a lover of pulps and books, so what the hell.

I don't know about Jack Deveny. I'm just so pleased that this issue was James's pick for this week.
Merry Christmas to all.