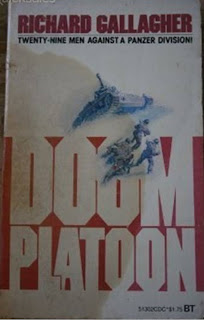 Readers of the World War II series THE SERGEANT by Gordon Davis may notice some similarities between those books and the novel DOOM PLATOON by Richard Gallagher. THE SERGEANT features a big, ugly, extremely tough non-com, Sergeant Mahoney. DOOM PLATOON features a big, ugly, extremely tough non-com, Sergeant Mazursky. Graphic violence abounds in both (although to be fair, these are war novels). There's plenty of crude, politically incorrect dark humor. None of these similarities come as any surprise when you realize that Gordon Davis and Richard Gallagher are actually the same person: veteran paperbacker Len Levinson.

DOOM PLATOON came out a couple of years before THE SERGEANT began, so it can be regarded as a sort of dry run for the later series, I suppose. But it can certainly be read with enjoyment on its own. During the Battle of the Bulge, the platoon of the title is under the command of Sergeant Mazursky after their lieutenant is killed in action. These 29 men are posted on a ridge above a narrow road, and their mission is to stop an entire Panzer division from advancing and hold the road until the retreating American army can regroup. It's a suicide mission, of course, and the first half of this novel is very intense as Mazursky and his platoon try to fight off the overwhelming Nazi forces.

Then, halfway through, DOOM PLATOON becomes a P.O.W. novel as the survivors from the battle are taken to a German prison camp, and the rest of the book chronicles what happens to them from then until the end of the war. While this part of the book doesn't have the urgency of the first half, it's still very well done and keeps the reader flipping the pages.

It's kind of a reviewer's cliché to say that prose is compulsively readable, but Levinson really does have that knack. His characters may not be particularly likable, but he makes you want to find out what's going to happen to them. This book, originally an obscure paperback from Belmont-Tower, is a good example of that.

Luckily, it's just been re-issued as an e-book by Pulp Heaven, an offshoot of Picadilly Publishing. They've published several more Levinson thrillers, and I have them all on my Kindle. If you're a fan of war fiction, or if you've read THE SERGEANT or Levinson's other series THE RAT BASTARDS (about the war in the Pacific, originally published under the pseudonym John Mackie), you'll definitely want to check out DOOM PLATOON.

I read THE DOOM PLATOON a few months ago and really enjoyed it. After talking to Len about the book, you're right that it was a dry run, of sorts, although he hadn't planned it that way.

A great author with a unique, eminently readable style to his books. Can't recommend him highly enough.

I've got this one but haven't read it yet. It moves up on my reading list now.

I'll have to download Gallagher's books. Your review makes them irresistible!

Thanks for the tip, James. I'll search it out pronto.