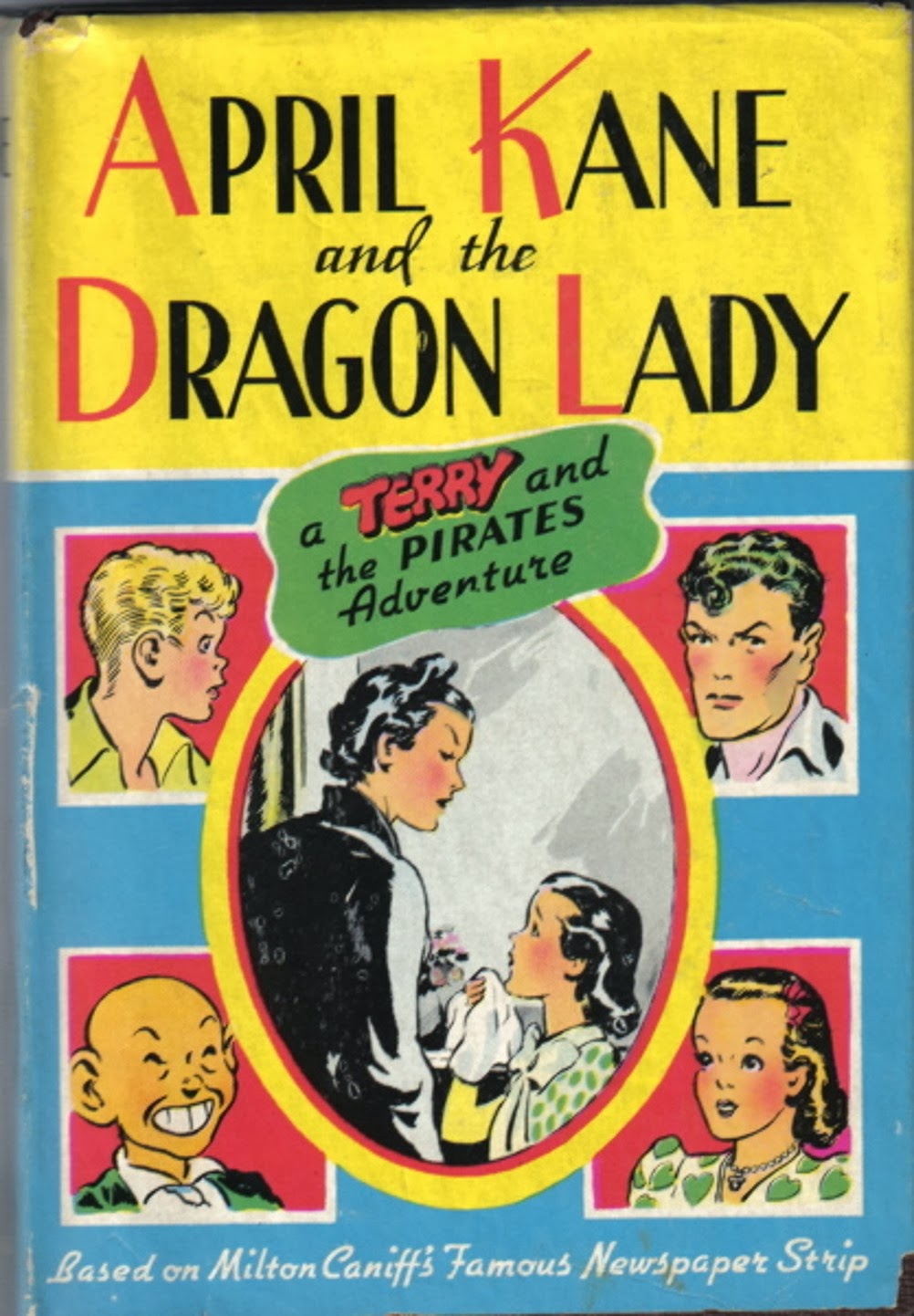 (Only a month into the new years and a rerun already. Well, what can you do? Sometimes nothing. This post originally appeared in somewhat different form on May 2, 2007.)

I’ve been a Milton Caniff fan since I stumbled across a volume reprinting some of the TERRY AND THE PIRATES strip back when I was in college. This Terry and the Pirates novel is a Whitman juvenile published in 1942, based on one of the story arcs from the comic strip originally published in 1939. No credit is given to whoever turned the story into a novel, but it almost certainly wasn’t Caniff himself. There are numerous illustrations “adapted” from the strip, so while they’re based on Caniff’s work, they’ve apparently been redrawn and simplified somewhat, lacking a lot of Caniff’s trademark details.

So how does APRIL KANE AND THE DRAGON LADY read as a book? Well, my opinion of it is rather mixed. The characters are great. The teenage trio of clean-cut, all-American Terry Lee, April Kane (a Southern belle in China), and the valiant British youngster Deeth Crispin III make appealing heroes for the kids, Terry’s mentor Pat Ryan is a typical two-fisted, wise-cracking Yank, and the Dragon Lady herself is one of the most complex characters in comics, part heroine, part villainess, and always unpredictable. As you might expect from material originally published so long ago, the treatment by Caniff and the unknown novelist of Chinese and Japanese characters isn’t what you’d call politically correct, but in the end it’s Pat and Terry’s Chinese friends, Connie and Big Stoop, who do a lot of the heavy lifting to save the day.

The storyline itself finds Terry, April, and Deeth caught in the middle of the guerrilla warfare being conducted by the Dragon Lady and her followers against “the Invader”, Caniff’s euphemism for the Japanese. There’s plenty of intrigue in Hong Kong, spies, ambushes, breakneck chases, a hidden city in the Chinese mountains, rival warlords, literal cliffhangers . . . great stuff, in other words. I would have absolutely loved this book when I was twelve years old – which was, of course, the target audience for the Whitman juveniles. Reading it now, I can see that the unnamed author didn’t do a particularly good job in places, especially in the action scenes. Big battles get glossed over in a paragraph or two or occur off-screen. Hand-to-hand fights are awkwardly written and lacking in drama for the most part. But towards the end of the book things begin to come together better and the story really catches fire. The slam-bang climax had me feeling like I was twelve again for a few minutes, and that’s not a bad thing. Unfortunately, the ending is rather abrupt and leaves some elements unresolved.

Overall, if you’re a Caniff fan, APRIL KANE AND THE DRAGON LADY is well worth reading, although the comic strips themselves are much better. I believe the novel was reprinted a few years ago, but copies of the original can be found fairly cheaply on the Internet. By the way, that dust jacket picture is one that I found on-line. My copy doesn’t have a dust jacket. (Said copy gone in the fire of '08, of course.)

And as another aside, when I was a kid the lead feature in the comics section of the local paper every Sunday was TERRY AND THE PIRATES, but it was written and drawn at that time by George Wunder, who replaced Caniff on the strip when Caniff left TERRY to create STEVE CANYON. I didn’t care for Wunder’s art and never read the strip back in those days, but since then I’ve read reprints of some of his work, and it’s not bad. I just had to be older to appreciate it. My adventure strips of choice when I was a kid were SMILIN’ JACK and BUZ SAWYER. Wonder how they’d hold up if I read them now. (And I'm still wondering, because I haven't read any reprints of them. Although I do have a SMILIN' JACK Whitman juvenile novel around here somewhere if I can find it one of these days.)
Posted by James Reasoner at 5:30 AM

I used to find an occasional Whitman book in thrift stores. But it's been years since any have surfaced around here. I've never seen a copy of APRIL KANE AND THE DRAGON LADY.

I had the same reaction to Wunder's art. But the reason I didn't like it initially was because I was comparing it to Caniff's which I'd been introduced to in the Harvey comic book collections. I don't have any of the Whitman books, but I do have a Random House book, Terry and the Pirates that has several unaccredited story adaptations, beginning with Captain Judas and ending with Terry becoming an Air Force pilot. The illustrations are either by Caniff or a very good forger.

When I was a kid I had a similar book from my dad's old collection. Blondie and Dagwood's Marvelous Invention, that was published in the 40's by Whitman. Unfortunately, it didn't have a dust jacket either. I remember liking the story and illustrations though.

Sitting here looking at my book, "April Kane And The Dragon Lady," takes me back many years. The copy I have doesn't have a jacket, it is dark blue with the title being in orange. It is an "Authorized Edition" copyright 1942. It is stated that the illustrations are adapted from newspaper strips copyrighted 1939. 29 illustrations are within the book, and on the inside there is a two page spread illustration in the very front and back of the book. The two page spread is the same picture in front and back. Will be posting the illustrations on my FB page.