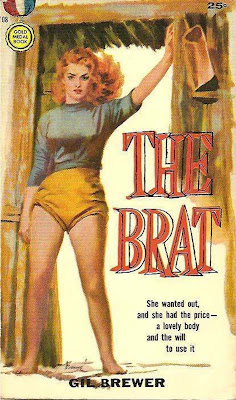 Gil Brewer's 1958 Gold Medal novel THE BRAT begins where a lot of noir novels end: with murder, robbery, and the sympathetic but none too bright protagonist's realization of just how badly life and the femme fatale have screwed him. And from there it just gets worse for our narrator, St. Petersburg, Florida printer Lee Sullivan, who has let his beautiful wife Evis talk him into a scheme that includes robbing the savings and loan association where she works. But nobody was supposed to die, and Evis wasn't supposed to take the money and disappear, and Lee wasn't supposed to be framed for killing one of Evis's co-workers at the savings and loan. Too bad for Lee that's exactly what happens.

From there THE BRAT becomes a chase novel as Lee pursues Evis back to the Everglades, where her family still lives. He knows that he has to find her and recover the money to clear his name. Of course it's not that easy, as Lee has to deal with treachery on all sides, an ambitious and vengeful back country lawman, and a barely legal swamp girl who happens to be Evis's little sister lusting after him. That's a lot for anybody's plate.

As usual with a Gil Brewer novel, THE BRAT is permeated with sweaty desperation. Even though a lot of it takes place in broad daylight, an air of gloom hangs over the story, helped in large part by the feeling of being hemmed in by the swamp and all its myriad dangers. You never know what's going to happen in a Brewer novel, but you can count it being bad for the hero most of the time. His prose has such a headlong pace, though, that it's hard to stop reading.

This is a fine novel and a prime example of Gil Brewer's formidable storytelling prowess. I really enjoyed it. And you can, too, since there's an e-book edition available from Prologue Books if you don't have the original paperback. Either way, THE BRAT gets a high recommendation from me.

Gil Brewer is experiencing a revival. STARK HOUSE is publishing his work and so is the University of Florida Press (short stories). Brewer deserves to be rediscovered. Nice review of THE BRAT!

I read this one recently myself and really enjoyed it.

I'm a big fan of Brewer's crime fiction and have read all of his novels and most of his short stories. The Brat is good, but Brewer's best is Three Way Split. It will have your heart pounding like a trip hammer!

Thanks for the recommendation, Tom. I have a copy of THE THREE-WAY SPLIT and will make it the next thing I read by Brewer.