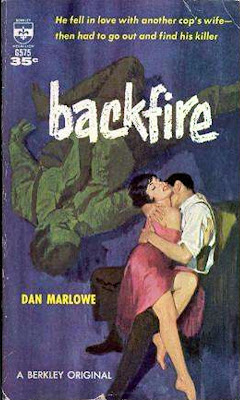 BACKFIRE isn't just the title of this 1961 stand-alone novel by Dan J. Marlowe. It's what life has done to its protagonist, police detective Marty Donovan. Marty and his partner Tony Alfieri are on an unauthorized stake-out at a jewelry store, trying to catch an elusive thief who seems to have some connection to the security company that put in the store's alarm system. Things go wrong when the thief shows up, just as Marty and Tony expect, but Tony winds up dead and the killer gets away.

Marty figures he can't just call for help, for a couple of reasons. One, they weren't supposed to be there since they didn't set up the stake-out with their lieutenant, and two, Marty is having an affair with Tony's wife and he's afraid if that fact comes out, he'll be suspected of killing his own partner. So Marty decides to make things look different than they actually, keeping himself in the clear while he tries to track down the killer.

This isn't really a wise decision, because things just keep going wrong, the case gets more and more complicated, and Marty finds himself sinking deeper and deeper into trouble. But you knew that was going to happen, right?

BACKFIRE is a brisk little hardboiled crime novel. Marlowe's style is pretty plain and functional, but he keeps things moving along nicely and the plot has several layers. This isn't on the same level as THE NAME OF THE GAME IS DEATH, Marlowe's masterpiece and one of the best crime novels ever written, but it's certainly worth reading.
Posted by James Reasoner at 6:00 AM

Do you happen to know if this one is in print, either paper or electronic format?

BACKFIRE really made me sit up and want to read more Dan J. Marlowe books when I first read in the Sixties. I'm also a big fan of THE NAME OF THE GAME IS DEATH.

Munseys.com had an e-book version at one time. I don't know if it's still there or not, but it probably is.

Thanks. I'll look for it this evening when I get home.

You're right, James -- BACKFIRE is a good one, but not among Marlowe's very best. A novel that Ed Gorman has touted as being one of Marlowe's better ones if FOUR FOR THE MONEY, but my reading of it a year or two ago puts it around the level of BACKFIRE...quite good, but not exceptional (of which I would label all his works that were reprinted by Black Lizard, especially, of course, THE NAME OF THE GAME IS DEATH).

My wording was a bit muddled in the above post...I meant to say that I feel his four Black Lizard works are comparatively exceptional.

I finally found a copy of The Name of the Game Is Death a couple of months ago and was disappointed. Perhaps it was all the hype.

The original edition of THE NAME OF THE GAME IS DEATH is supposed to be considerably better than the version that was revised to make it part of the on-going Earl Drake series. I don't really remember which version I read. I came to it not having any idea what to expect, though, which probably helped.

I have been meaning to read a few Dan Marlowe novels for a while, especially since I have a couple of his books as well as some ebooks downloaded from Munsys.com, I think. They have a great collection of pulp fiction.

The Name book I found and read was the original.