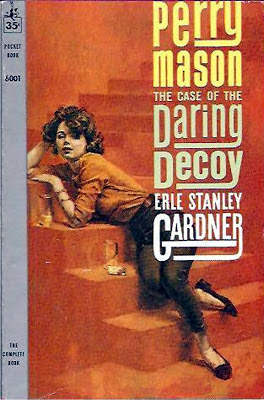 (This post originally appeared on October 23, 2007 in slightly different form.)

THE CASE OF THE DARING DECOY is from 1957, still a good period in the Perry Mason series, if not as consistently excellent as the more hardboiled Thirties and Forties. By this time many of the books opened not with Mason, as the earlier ones do, but with the person who will turn out to be the client later on. That’s the case here, as the first chapter of the book features Jerry Conway, the young, dynamic president of an oil exploration company who’s facing the fight of his life as a former associate wages a proxy battle to take over the company. Conway is contacted by a mysterious woman who claims to have information that will be valuable to him in his struggle, but she says she’ll turn it over to him only after he jumps through some hoops to make sure neither of them is being followed. Their rendezvous is supposed to take place in a hotel room, but when Conway gets there he finds a different woman, wearing only her underwear and brandishing a revolver. Conway winds up with the revolver (you knew that was going to happen) and a murder charge hanging over his head (equally inevitable). When you’re in a situation like that, who you gonna call? Perry Mason, of course.

From there it’s the usual dizzying mix of interrogations, banter, genuine clues, and red herrings. Is there only one gun involved in the case, or two? What about the peas in the room service meal? Why did the half-naked, gun-toting babe have a mud pack on her face? There’s a little more comedy than usual in this one, with some snappy, funny lines from various characters, even the usually dour Mason, and there’s even a touch of romance. The plot makes sense (I think), and for once I even spotted some of the clues and figured out ahead of time who the real killer was, something that hardly ever happens when I read a book by Erle Stanley Gardner. I didn’t have all the details worked out, but I had the right suspect pegged.

I thought this book was great fun, and my only real complaint about it is the rather sedate cover of the paperback edition. I mean, really, a beautiful woman in her underwear waving a gun around is the perfect image for a book like this, isn’t it? Even with a mud pack? (Okay, you could lose the mud pack on the cover and call it dramatic license . . . )
Posted by James Reasoner at 6:00 AM

I am sure I read this because my mother had all of them on a shelf in the dining room. I can remember those covers still.

This must be one of many I don't have. But I like the cover and the plot sounds interesting and I read them up until about the 1962 or 1963 books.