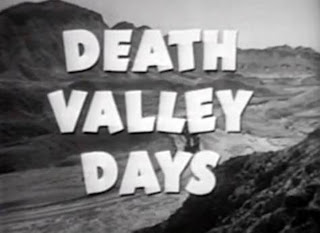 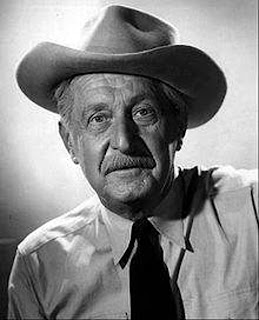 When I was a kid there was a regular TV routine in our house on Saturday night: Lawrence Welk, HAVE GUN WILL TRAVEL, GUNSMOKE, the 10 o'clock news, and then finally an episode of DEATH VALLEY DAYS, usually hosted and introduced by The Old Ranger, played by actor Stanley Andrews. DEATH VALLEY DAYS was a syndicated half-hour Western anthology series that originated on radio and then ran for more than twenty years on TV. A lot of the stories were based on historical incidents, and I remember it being fairly low-key and realistic most of the time, hardly the stereotypical shoot-em-up. Practically every character actor in the business appeared on the show sooner or later, as well as some young actors who went on to be stars, like James Caan and Angie Dickinson. Ronald Reagan, Robert Taylor, and Dale Robertson appeared as hosts for the program in its later years. The stable of writers included some familiar names, too, such as pulpsters Robert Leslie Bellem and John K. Butler, as well as the wonderfully-named Sloan Nibley, who wrote some good Roy Rogers movies and was married to the beautiful actress Linda Stirling. This was one of my dad's favorite series. As a kid, and a fairly bloodthirsty one at that, I tend to prefer the more action-packed shows, but I remember watching and enjoying a lot of episodes of DEATH VALLEY DAYS, too. There are quite a few complete episodes available on YouTube if you're interested in checking them out.
Posted by James Reasoner at 6:00 AM

I remember this one very clearly-even the music.

Longest run of any weekly dramatic series on US commercial television. Even GUNSMOKE couldn't touch it thus.

I wonder if LAWRENCE WELK was still on ABC in those years, or if his series was also already moved over to the syndicated run of the latter half of the series (before the current repeats, from the Oklahoma PBS group, hence their appearance on public stations).

I'm pretty sure THE LAWRENCE WELK SHOW was still on ABC during the time I'm thinking about. A-one and a-two . . .

I loved this series. For a while it was my favorite, next to Gunsmoke, of course. It had a grittiness to it that I liked a lot.

I LOVED this program! It was on earlier on the west coast, I'm remembering it at 7:30 pm. Great stories plus it was "brought to you by Twenty Mule Team Borax!" The ads had a real 20 mule team on the salt flats pulling a covered (?) wagon of some kind. The Old Ranger was the best, I was sorry when others did the intro and close. Thanks for the reminder. I wonder if any of these are on DVD?

Some episodes are available in boxed sets of public domain TV Westerns like TELEVISION'S GREATEST WESTERNS and ULTIMATE TV WESTERNS. I certainly remember the 20 mule team and those Borax commercials. We may have even had a can of Borax in the cabinet under the kitchen sink.

I watched it for years, but not at the same hour you did. I really thought The Old Ranger was an old ranger and was shocked when I saw him in something else one day. What a naif.

I have three or four 20 Mule Team model sets, too. I need to build one of them someday. At least one is already built.

One other thing. The wagons being pulled by the mules aren't covered. They just have very high sides and are loaded with borax. Two wagons and a water trailer are being pulled through Death Valley by those poor old mules. I've always felt sorry for them.