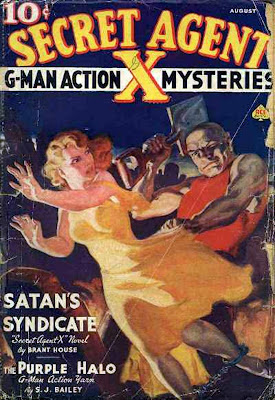 Secret Agent X is back in "Satan's Syndicate", from the August 1937 issue of the famous pulp. This one has a particularly creepy setting, the Pennsylvania coal mining country, where an underground fire has been burning for years in a mine called Inferno, casting a hellish glow into the night sky, coating everything with soot, and causing exploding gases to vent out through cracks in the ground with a noise like the wailing of lost souls. The author keeps everything eerie and atmospheric all the way through.

The syndicate of the title consists of five wealthy men and one wealthy, beautiful woman who own all the lucrative mines in the area, including Inferno. Unfortunately, a secret in their past puts them in danger when a killer targets them one by one. Secret Agent X is on the trail of that killer, attempting to stop him before he manages to kill off all the members of the syndicate by bizarre methods.

The action in this fairly short novel is just about non-stop. One victim is burned to death by being strung up from a crane and dangled over the flames of the burning mine. Another is kidnapped to be buried alive. Disguises and death traps abound as the Secret Agent tries to triumph over a criminal mastermind. Will he succeed?

Well, yeah, but you knew that going in. The fun lies in the breathless pace, the over-the-top action, and the vividly rendered setting. This is a very entertaining yarn and well worth reading if you're a pulp fan.

A couple of background points are worth noting. While "Satan's Syndicate" mostly reads like the work of prolific Secret Agent X author G.T. Fleming-Roberts, publisher Brian Earl Brown believes (and I agree with him) that it may well have been written originally as a stand-alone story, rather than a Secret Agent X novel. Most of the usual trappings and all of the supporting characters from the series are missing, except for a couple of very fleeting references to Inspector Burks, X's nemesis from the New York police, and Harvey Bates, the Agent's right-hand man. This ties in with something else I noticed, namely that there seem to be two writers at work here. The style in some of the scenes strikes me as different from the rest of the story, which would make sense if some unknown editor took a Fleming-Roberts detective novel from the publisher's inventory and rewrote it into a Secret Agent X novel. We'll probably never know for sure, of course, but I like speculating about such things. Whoever wrote "Satan's Syndicate", it's fun to read.
Posted by James Reasoner at 6:00 AM

I've always felt that SECRET AGENT X was one of the very best of the hero pulp titles. It did not have the silly dialog from such childish characters as Monk and Ham in DOC SAVAGE and Nippy and Bull in G-8 AND HIS BATTLE ACES.

Like THE SPIDER, the plots were full of fast action and weird menace. G.T. Fleming-Roberts never has received the proper recognition that he deserves as one of the better pulp authors.

Amazing. He anticipated the Centralia mine fire by 30 years. (It has been burning since 1962.)

Do we know who painted the cover?

Looks like Norman Saunders to me.
Great, well-rendered, melodramatic scene right there.

John,
Good eye! That's a Norman Saunders cover, all right. And it illustrates a scene from the story, always a plus.