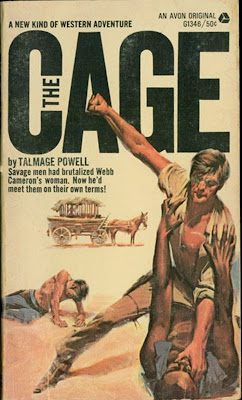 I don't usually think of Talmage Powell as a Western writer. I know him better as the author of a hardboiled mystery series featuring private eye Ed Rivers, as well as other mystery stories and novels. But he contributed a number of stories to the Western pulps in the Forties and Fifties and also wrote this 1969 novel, which turns out to be an excellent Western.

THE CAGE starts out as a standard revenge Western. Former Confederate officer Webb Cameron and his wife start a small ranch in after the Civil War. While Cameron is away from home his wife is attacked by someone. Though beaten and raped, she isn't killed (Powell's first deviation from the standard formula). The ordeal does cause her to lose her mind, however, and retreat from reality. When Cameron finds her, he vows to track down her attackers and make them pay.

This is when Powell throws another twist at the reader. Instead of leaving his wife with friends, relatives, or just about anybody else to care for, Cameron builds a cage for her in the back of a wagon (so she can't wander off and hurt herself) and takes her with him on his vengeance quest. From there things get weirder as Cameron picks up some unlikely allies (all of whom have interesting back stories, which Powell explores with as much depth as possible in a 127-page paperback), runs into a band of renegade Seminole Indians who have escaped from a reservation (the idea of putting swamp Indians in the desert instead of the usual Comanches or Apaches is a very nice touch), and finally tracks down the men he's after in a small Mexican village run by a typical Mexican bandido who turns out not to be so typical after all.

This is a bit of a kitchen sink book, with a lot of Western cliches thrown in, but Powell turns nearly all of them on their head and does so in a crisp, fast-moving style. I highly recommend this one to anybody who likes an offbeat Western.
Posted by James Reasoner at 6:00 AM

Powell's Ed Rivers novels are excellent, and cruelly under-rated, detective tales.
Is The Cage told in first person? One of the great pleasures of the Ed Rivers stories is the ultra-vivid clarity of the first person prose. Powell really puts the reader right into the story with his protagonist.

Powell sure did like these edge-of-madness sexually-charged revenge stories.

They do hook into the gut.

I remember thinking that when I read "The Cage" years ago that it was the best Western that I've read in years. Maybe that was because it was a bit different than your standard western novels coming out in the 50s/60s. It sure was a well written one by Powell.

John,
This is actually an old review of mine cannibalized from the WesternPulps archives, so I don't recall whether it's in first or third person and don't have the book anymore to check. My feeling is that it's in third person, but I don't know for sure.

I have and enjoyed the Ed Rivers series but it seems I don't have THE CAGE. I just ordered a copy from abebooks.com for $5.00 plus postage. Thanks for letting us know about this novel. I'm always interested in something different or offbeat.

John: If I remember right I believe it was written in a third person account.

It is in third person. What a tough little western with interesting characters and a bleak landscape. Now I'd like to find some of Powell's crime dramas, though I've seen a bit of his television writing.