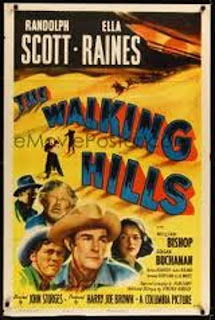 As with John Wayne, I was a big Randolph Scott fan when I was a kid and watched just about every movie of his that ran on TV. But the same thing happened with Scott's THE WALKING HILLS that did with Wayne's THE LONG VOYAGE HOME. I'd never even heard of it until I was grown. Once I saw it, though, it became probably my second favorite Randolph Scott movie, after RIDE THE HIGH COUNTRY.


Also like THE LONG VOYAGE HOME, THE WALKING HILLS is an ensemble piece. It's a contemporary (1949) Western about a small group of people who discover a clue to a wagon train full of gold lost in Death Valley a hundred years earlier. Among the group are a private eye (John Ireland) on the trail of a fugitive, a beautiful woman (Ella Raines), a colorful old-timer called Old Willy (who else but Edgar Buchanan?), and a horse breeder (Scott) who's a more morally ambiguous character than Scott usually played. To protect their secret, they set out into the desert together, but in addition to battling the elements (there's a great sandstorm at the end), naturally they wind up battling each other, too.


This movie is very much a noir Western, and the stunning black-and-white photography is a big part of that. It's some of the best I've seen. All the actors turn in good performances, the direction by John Sturges, early in his career, keeps things moving along very briskly, and the script by Alan LeMay has plenty of good lines and plot twists.

Not long after I saw this movie for the first time, I read the Erle Stanley Gardner collections WHISPERING SANDS and PAYDIRT, which reprint some of Gardner's stories from the pulp ARGOSY that feature desert detective Bob Zane. These are some of my favorite Gardner stories, and as I was reading them I couldn't help but see Randolph Scott as Zane. If you've read those stories and liked them, you really should watch THE WALKING HILLS. It's the same sort of hardboiled contemporary Western. If you haven't read the Gardner collections, you should watch THE WALKING HILLS anyway, because it's an excellent film and deserves to be remembered. (Then go hunt up those Gardner collections and read them. I think it's about time for me to give them a go again.)

Scott is my favorite classic western star, but I don't know this film. And it doesn't look to be available on DVD.
Rats.
Looks great, though. Do you really like it more than Scott's movies with Budd Boetticher?

As you know, I'm a big Scott fan. Haven't seen this one in years, but it's a good one for sure.

John,
I've seen the Boetticher films more often than I've seen THE WALKING HILLS and I love them, too. They hold up really well to repeated viewings, and I don't know if that's the case with THE WALKING HILLS. And as you point out, unfortunately it's not readily available and I don't have a copy, so I wasn't able to watch it again. But in terms of initial impact, yeah, I think it's slightly better. Only slightly, though.

I'm a big Scott fan, too. Love this film; really has a noir resonance. I also love Gardner's Whispering Sands stories. I have both collections and read a tale or two quite often. I consider them some of his best work.

I really do need to see more of Scott's better work.

New to me. Sounds very cool.

Scott had so much class; such a smooth, graceful physical presence, and drop dead handsome. My favorite: SEVEN MEN FROM NOW.