I admit, I’m fudging a little by doing this as a Forgotten Books post. At 20,000 words or so, “Ki-Gor, King of the Jungle” can’t really be called a book (although many a pulp editor cover-billed stories of that wordage as “full, book-length” novels). But I enjoyed reading it and think it deserves having a few things said about it.


First of all, the Ki-Gor series was one of the longest-running Tarzan imitators, appearing in the pulp JUNGLE STORIES from the Winter 1938 issue to the Spring 1954 issue. The first story, “Ki-Gor, King of the Jungle” was published originally under the name of the actual author, John Murray Reynolds, and reprinted later under the house-name used for most of the stories in the series, John Peter Drummond. Other authors who contributed to the series included Dan Cushman, Robert Turner, Wilbur S. Peacock, and James McKimmey, best known now for the hardboiled crime novels he wrote for Dell during the Fifties and Sixties. 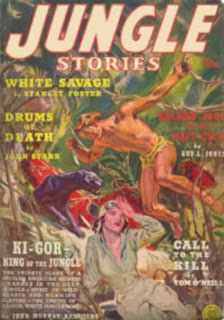 Ki-Gor himself is the typical big, bronzed jungle hero swinging through the trees and fighting with natives and wild animals, although he’s blond rather than having dark hair like Tarzan. In the course of this first entry in the series, it’s revealed that he’s really Robert Kilgour (see where the name Ki-Gor comes from?), the son of a missionary who was murdered by warriors of the Wunguba tribe when Robert was a little boy. Growing to manhood in the jungle, he almost forgets who he really is and his command of the English language starts to slip away from him, too, at least, that is, until he rescues society aviatrix Helene Vaughn, whose plane crashes while she’s trying to fly across Africa.


Reynolds doesn’t make any secret of the fact that this story is influenced heavily by Edgar Rice Burroughs’ Tarzan novels and even more so by the Tarzan movies with Johnny Weissmuller. There’s even a “Me Ki-Gor, you Helene” line of dialogue. The plot is fairly skimpy in this first yarn. Ki-Gor meets Helene, his back-story is revealed, and he battles some natives and then rescues Helene from Arab slavers when she’s captured by them.


So why read such a blatant imitation? Well, for one thing, it’s pretty well-written. I’d never read anything by John Murray Reynolds before, but his prose flows nicely and the story has a good pace to it. Helene turns out to be a surprisingly good character, too. She’s not there just to look pretty and get captured by the bad guys (although she does perform both of those functions). She’ll get right in there and fight alongside Ki-Gor. Also, for a story published in 1938 featuring African natives, there’s not much at all of the casual racism you sometimes encounter in such stories. The warriors of the Wunguba are villains, sure, but they’re presented as formidable enemies and Ki-Gor obviously has plenty of respect for them.


A number of pulp fans have mentioned that the Ki-Gor series is really better than they expected, and based on this first story, I think they may be right. I plan to read more, and luckily I can because the great small press publisher Altus Press has plans to reprint the entire series. The first six stories are available now in a single volume, which is where I read “Ki-Gor, King of the Jungle”. That’s another thing weighing against calling it a Forgotten Book, but since I imagine the Ki-Gor series is pretty far off the radar for most modern readers, I’m going to justify it that way. I liked this story, and since it ends without much of a real resolution, I’m looking forward to getting back to the series soon.
Posted by James Reasoner at 6:00 AM

I have a hefty stack of these stories in Hanos reprints and a few more recent ones in High Adventure, but still haven't read that first story. Most of the later stories are what the pulp mags called "novels," so I'm guessing they're closer to 40,000 words. Quality varies, but some are very good. Have you seen a list of who wrote what?

I'm not sure anybody has determined who wrote which stories in the Ki-Gor series. My friend Morgan Holmes has done some research into that and I believe has a pretty good idea who wrote some of them, but I don't think a list of author attributions has ever been published. However, there's a good website at:

that lists all the stories and has cover images of the issues in which they appeared.

And here's a listing of all the Ki-Gor reprints. I didn't realize there had been so many.

Though I've read most, but not all, of Burroughs' Tarzan books, Ki-Gor is territory I've never entered, and I'm not sure I will. Jungle tales - Kipling excepted - have never interested me that much and the ERB was enough to suit me. Excellent review, however, and I suppose if one of these fell into my lap, and I'm not looking for that to happen, I might read it. Eventually. Maybe.

The Ki-Gor series is wildly uneven but if you like the early stuff, well, it just gets pulpier and pulpier as it goes. The best novels are deliriously over-the-top blizzards of purple prose and outrageous plot developments. Even some of the issues from the 1950's still pack the kind of lurid action you'd expect from a 1930's pulp.