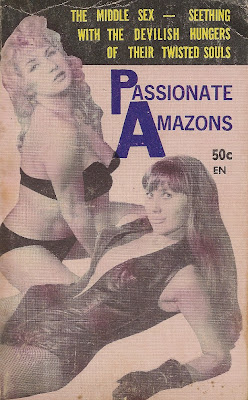 Talk about finding little gems in unexpected places! I picked up this volume in Half Price Books’ nostalgia section because it looked like an early Sixties sleaze novel from a publisher I wasn’t familiar with, All Star Books. There’s no author’s name on the cover, and when I opened it up, I saw that it was written by somebody named Harry Barstead (“author of MALIBU NYMPHS”). Never heard of him. Now, judging by the title, PASSIONATE AMAZONS, and the cover copy, you’d think it’s a novel about bisexual women, right?


Nope. PASSIONATE AMAZONS is a collection of short stories. In fact, some of the grubbiest, most hardboiled, noirish crime stories I’ve read in quite a while. And they’re pretty well-written, too, as well as populated by some vividly drawn lowlifes.


“Too Hot for Him” is about a guy whose wife abandons him and their three-month-old son. When her father dies several years later, the narrator keeps a promise he made to the dying man and goes looking for her. What he finds isn’t pretty. You’ll probably want to shower after this one.


“No Good in Bed” is the weakest item in this collection. It’s not actually a story at all, but rather a mock-sociological essay about the sexual habits of the average American female. There are a few funny lines in it, but it really doesn’t amount to much.


“65 Men and a Girl” takes place in the cell block of a county jail somewhere in the South, where the jailer stages fights between the inmates every Saturday night, with the winner getting a visit from a local prostitute as his prize. Pretty sleazy stuff, with a twist ending that’s effective, if not all that surprising.


“I Saw You!” is a short, twist ending story about a cheating wife. Again, not too surprising, but well-written.


“Without Shame” is the story of a couple of young lovers who are trying to make it on the nightclub circuit as a dance team. Not the most noirish set-up, admittedly, but it plays out that way.


“Look But Don’t Touch” ventures into Orrie Hitt territory with a Peeping Tom who sees a lot more than he bargained for.


“Prisoner of Lust” is an amnesia story in which a young woman wakes up with a husband she can’t remember and a murder charge hanging over her head.


“Sex Down South” is the longest story in the book, a novelette about a Southern family that comes apart at the seams on one fateful night. Plenty of lust, jealousy, alcoholism, and murderous madness in this one. This is Tennessee Williams territory, although on a much lower but still effective level.


Rounding out the book is “Rent Money”, a really bleak story about the lengths a young wife goes to in order to keep a roof over her and her husband’s head. Like most of the rest of these yarns, it’s pretty unpleasant, but it packs a punch.


This collection was published in 1962. I don’t know if the stories appeared originally in lower-tier men’s magazines from that era or if they were written specifically for the book. They’re good enough that I had to wonder if we might know the author better under some other name. So I did a little investigating on the Internet, and it turns out that “Harry Barstead” was really Jack Jardine, a Los Angeles-area science fiction fan in the Fifties best known as Larry Maddock, the pseudonym he used on the four Agent of T.E.R.R.A. time travel novels published by Ace in the Sixties. Was “Harry Barstead” a deliberate corruption of “hairy bastard”? We can only speculate, of course, but it seems plausible.


I liked PASSIONATE AMAZONS quite a bit. Jardine could spin a good hardboiled sleaze yarn in addition to his SF. The chances of you coming across a copy are pretty slim, but if you ever find one at a reasonable price, grab it. The Harry Barstead books go for a lot of money on ABE, but over and above that (and much more important, to my mind), it’s well worth reading.
Posted by James Reasoner at 6:00 AM

What a great find! The cover alone makes it worth having.

I love these obscure books! And, good detective work discovering the low-down on the author!

Well, think of the improved cover Stark House could put on the Jardine omnibus...reminds me of Algis Budrys's plaint about finding, out of desperation, that something called BIKER SLAVES OF MARS turns out to be an interesting and assured work, and enjoying trying to recommend such a title (when it could be found again) to others. Kilgore Trout also comes to mind (and his novel TO MARRY MEDUSA released instead as THE COSMIC RAPE)...

Another reason to troll the used-book stores, as this one probably won't be showing up as an e-book (and how would you find it, if it did?). I might have to read it for the "mock-sociological essay about the (early 60s) sexual habits of the average American female," alone.

I found a bizarre little book like that a few months ago-also written in the sixties-- about animal love. The sixties were strange times.

You had to find books and magazines in those days (and even more recently) to find the kind of stuff one can access much more easily on the web now. And in the '60s, it started to be possible to publish such without being incarcerated at whim.

Though amusing that books like this pretending to be pornobacks, and perhaps were for some readers, also proliferated.

There's quite a bit of sex in this book, but in the same softcore style you'd find in Nightstand Readers and Beacon Books. And there's probably less of it than there was in the books from those other publishers, too.

James, I would recommend GIRLS ON SIN STREET by Larry Maddock. It's not too expensive and is in the same vein: a collection of short stories with crime elements. The subtitle is "An anthology of Pros."

Thanks, Randy. I'll check it out.