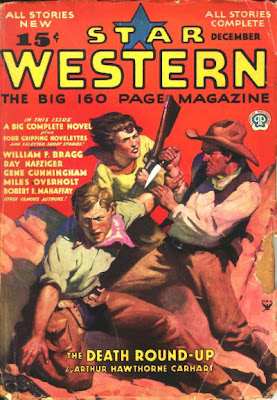 I really like the covers on STAR WESTERN and find them very distinctive.  You can't get much more action-packed than this one.  The stories were consistently top-notch as well.  I think it's one of the best of the Western pulps.
Posted by James Reasoner at 7:00 AM

Cool. Being (too-typically) too lazy to go look up its stats at the moment, was STAR flourishing at the same time that stablemate DIME WESTERN was at its zenith? Rather blah logo, but that is a well-rendered cover.

DIME WESTERN came first and its success prompted Popular Publications to launch STAR WESTERN as a companion magazine. The first editor (Rogers Terrill, I think) made a point of using more novelettes and novellas in STAR than in DIME, to make them a little different. I prefer STAR to DIME because I like the longer stories, but they're both fine Western pulps. And I've always liked STAR's red background a little better than DIME'S yellow one, too.

Have studied many pulp western covers, and some like this one practically tell an entire story. The circle of fists at the center with the knife defines kinetic.

An intriguing cover. It tells a story in itself - a potential reader can't help but pick up the book and open it up to find out what's going on.

In the comment above Richard Bonham Waters mentions the intriguing cover. Harry Steeger, the publisher of STAR WESTERN, was a guest at Pulpcon and he told the story of how he had a small newstand set up in his office to see his magazine titles displayed.

The idea was to catch the attention of the people walking by, so STAR had the bright red background on every cover with the action scene. Every title had its own eye catching color. STAR was always red, DIME was always yellow, etc.