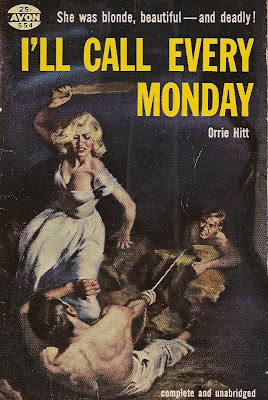 Frank Loose, a regular reader of this blog, sent me some comments on Orrie Hitt’s novel I’LL CALL EVERY MONDAY, which was given a high recommendation by August West, another regular reader and the author of the blog Vintage Hardboiled Reads. I thought Frank’s comments deserved a post of their own, so here is Rough Edges’ first guest blog.

James … Your fascinating story about author Orrie Hitt, in your February 19th blog entry, prompted me to track down and purchase a copy of Hitt’s book I'LL CALL EVERY MONDAY. I just finished it last night and it is a good read. Hitt does not write scenes with the intensity or the relentless pacing of Gil Brewer, nor is he the craftsman that Charles Williams was, but what he does, he does well. In I'LL CALL EVERY MONDAY, he creates a first person narrator with a distinct, consistent and engaging voice, and a story line that, while a tad slow for folks used to thriller and suspense pacing, moves forward with a natural ease and grace that sucked me in.

From what I have read about Mr. Hitt, his writing career is notable for his prolific output and for writing in what I guess you could call the sex genre. I'LL CALL EVERY MONDAY has sex scenes, but by today’s standards they are tame, and are actually well written. This is not exploitation, but the real lives of people played out on paper. Yes, there is a heavy focus on viewing every woman from a physical point of view, but this true to the main character’s personality–––one obsessed with the female form and the pleasures and escape he can find there.

It was also a reflection of the times. Given what was obviously titillating writing for these times, Hitt delves a bit deeper by juxtaposing the main character’s attitudes toward women and sex, with another pivotal character who is portrayed as someone who has “stepped over the line” of society’s mores. A hack writer of expendable fiction doesn’t worry about that sort of nuance, but Hitt did and it layers his story. There are more examples, but enough said on all this without revealing plot points. You may decide to read this book.

The story involves an insurance salesman named Nicky whose main goal in life seems to be bedding every woman he finds attractive. He has no pretense of relationship. Still this is no “lay ‘em and leave ‘em attitude,” as he seems to establish relationships in spite of himself. And just when you are thinking he is despicable and self-centered, he surprises with an action for someone from which he will reap no gain. He steps forward because it is the right thing to do. Hitt has drawn an interesting multi-dimensional character. The book starts slow, but the story picks up speed, ala James Cain, when he meets a woman who Hitt shows is a real match for Nicky, both in her ability to manipulate and in her sexual desire, which she shows can outmatch Nicky for intensity. Throw in an insurance swindle, again ala James Cain, and you have the basis for I'LL CALL EVERY MONDAY.

This book probably wasn’t Gold Medal territory at the time it was written, but it was published by Avon, no back street publisher by any stretch. August West, in his post to you, rated this book in his Top Twenty Favorites, and I can see why he thinks highly of it: strong characters, a building sense of emotional and physical danger, and a twist at the end. An enjoyable read–––and if nothing else, worth tracking down to see what kind of book an author can knock out typing away at his kitchen table while entertaining his daughter’s friends.

The true test of a book for me is how long the characters stay with me after I finish reading. So, the jury is still out on this one, but based on past experience I think this one may stick around.

Posted by James Reasoner at 9:36 AM

Great post, Frank. Made me want to read it.

I have two Hitt novels in my Amazon cart and I will switch out one for I'LL CALL EVERY MONDAY. Great review, thanks.

I've been a Hitt Man (pardon the expression) for about two years, after being introduced to him by a dear and gracious bookseller friend named Jerry Chadburn. Ever since, I've been on an almost (almost? who am I kidding?) obsessive mission to buy every Hitt book and find any information about him I could.

Here's my Hitt-cred at present:
82 paperbacks and 1 hardcover.
The paperbacks include those he wrote under his own name, the pseudonyms Roger Normandie and Nicky Weaver, and the lesbian-themed books he wrote as Kay Addams. The hardcover is called "Leased" and was co-written with Jack Woodford.

I was also fortunate to find a lengthy interview with the Hitt children and a detailed bibliography from a copy of "Books Are Everything!" Vol. 5, No.1, Whole Number 21. The article has photos of Hitt, both alone and with his wife, numerous book cover photos, and is a more-than-generous 48 pages.

As well, I managed to find an article written by The Man himself called, "My 'Sex' Books" from the magazine "Men's Digest" #31. Unfortunately, it's only half the article, the other half appeared in #32, which I have yet to find.

I must disagree with the gracious guest host, and implore that Hitt did indeed often write with the intensity of Gil Brewer, and in fact with even more intensity than many a Gold Medal writer.

Possibly my disagreement comes from the fact that I consider "I'll Call Every Monday" one of Hitt's weaker books. In fact, I don't think Hitt is at his best when using James Cain-type plots. To me, Hitt's best writing comes out of two types of stories. One type is about the tough guy who juggles as many dames as he can, while also throwing a ball in the air for a major scam at whatever job he happens to be working. The tough guy is usually too-clever-by-half, and the balls come tumbling down, whereupon whatever publisher Hitt was working for at the time made sure the tough guy saw the light, reformed, and married the one good girl he had ignored throughout the book. All this in the last 3 pages of the book!

The other type is about what a nightmare it was to be a woman in the 1950's. In this type of book, the woman is just trying to claw her way out of the low-income gutter, but is screwed-over every way and by every guy she comes into contact with. The worst thing that can happen to a woman in this type of book is that she become an unwed mother. Hitt wrote about this nightmarish scenario with as much passion and intensity as Woolrich wrote about death and isolation. Truly The American Nightmare.

I also think Hitt writes about low-income folks better than he does about folks living in the suburbs or the upper classes.

Anyway, this "comment" is turning into my own "guest blog", which I didn't plan, so I think I'll blast off back into cyberspace.

If anyone wants any info from my Hitt articles or books I'd be happy to respond.

P.S.
By the way, here are the top ten on my "Hitt Parade" (not necessarily in order of importance):

1.Shabby Street
2.As Bad As They Come (also titled Mail Order Sex)
3.Torrid Wench
4.Race With Lust (as Roger Normandie)
5.The Sucker
6.Rotten To The Core
7.Warped Desire (as Kay Addams)
8.Teaser
9.Campus Tramp
10.Wilma's Wants (Published by Novel Books, who apparently allowed Hitt to bring out his political and philosophical side. I'd say Hitt was a fiscal conservative and a social liberal, with a pinch of Ayn Rand thrown in. While still having the same plot framework, I'd say the core of the Novel Books are significantly different from books Hitt wrote for all other publishers.)