Sgt. Rock: Between Hell and a Hard Place 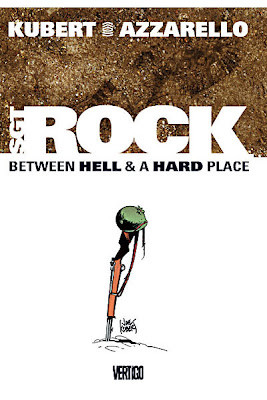 After reading some Sgt. Rock stories in that digest collection earlier this month, I was in the mood for more. SGT. ROCK: BETWEEN HELL AND A HARD PLACE is a real mixture of the old and new. The art in this graphic novel is by the classic Sgt. Rock artist, Joe Kubert. And I mean all the art is by him, right down to the color separations and the lettering. The script is by Brian Azzarello, who I guess is new compared to Kubert, although he’s actually been writing comics for more than ten years now. It’s an odd combination, but it works. Really well, in fact.

The story finds Easy Company in the Hurtgen Forest, advancing from Belgium into Germany. Most of the “combat-happy joes” that long-time readers are familiar with are here: Ice Cream Soldier, Bulldozer, Wild Man, Little Sure Shot, and of course, Sgt. Rock himself. There are also a lot of new replacement troops sent to the front for the big push that’s coming. The first part of the book is a fairly standard war story, with Kubert and Azzarello introducing the reader to the new characters and filling in some back story on the older ones.

But then halfway through, the story takes a sudden twist. Easy has captured four S.S. officers, and during the confusion of a skirmish, three of the prisoners wind up dead, shot at point-blank range. The fourth prisoner is missing. The rest of the book has Rock trying to solve the mystery of who killed the German officers while also trying to keep himself and his men alive and carry out their orders to capture a town being occupied by the enemy. It’s a big job, but who better to handle it than the indomitable Sgt. Rock?

Joe Kubert’s art is a little looser and less detailed here than it is in those classic stories from the Sixties, but it’s still very effective. You expect an old pro like Kubert to be a great pure storyteller in his art, and he certainly is. The violence is a little more graphic than it was in the old OUR ARMY AT WAR days, and so is the language in Brian Azzarello’s script. Azzarello does a fine job, though (except for one bit of dialogue that’s so anachronistic it knocked me right out of the story for a moment). He’s one of the modern-day minimalists when it comes to comic book scripting: no captions, just dialogue. That's all right when you’ve got art like Kubert’s to work with, but I’ll admit, having grown up in the Sixties, when I read modern comics I sometimes miss the more traditional writing styles of Stan Lee, Gardner Fox, John Broome, etc.

Overall, BETWEEN HELL AND A HARD PLACE is a very good World War II graphic novel. Rock is still Rock. If you’re already a fan, that right there is all the reason you need to read this one. And if you’re not, this is a good place to start. Highly recommended.

Posted by James Reasoner at 8:23 AM

oohhh,I've got to get this. Love me some Sgt. Rock

I've got a couple dozen Our Army at War comics, the Kubert/Kanigher ones - and they're still moving when reread.
Nik Morton

As a comic reader Azarello is a bit hit and miss for me.

His best series is doubtless 100 Bullets which comes to its conclusion with No.100.

While I personally think that crime comics have become obsolete, this 100 chapter long novel - which it basically is - is a lot of fun, even if it requires some patience from the reader.

I'm jealous of these Rock collections you're coming up with. I haven't found them in any of the stores I've stopped at.

David, DC have brought out Showcase Presents Sgt Rock volumes 1 & 2 which are reprints of Our Army at War and the later Sgt Rock comics.(Reasonably priced on Amazon.com); then there's the Sgt Rock Archives - a bit dearer... also on Amazon.com.
Nik Morton

I've not read any Sgt. Rock in years. I might track this one down.