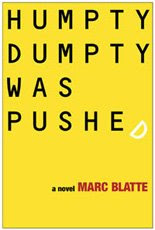 Those of you who know me would probably guess that I’m not exactly a hip-hop kind of guy – and you’d be right (although I actually do like some of the music that falls into that category). HUMPTY DUMPTY WAS PUSHED, the debut novel by Marc Blatte, calls itself a hip-hop noir mystery. It’s not, really. The music industry setting is important, but it’s only one element of the plot, and I didn’t think the book was noir at all. If, of course, noir can actually be defined. Instead, HUMPTY DUMPTY WAS PUSHED is a pretty good cop novel featuring a likable new detective character.

Salvatore Messina is a New York City cop investigating the murder of an Eastern European immigrant who worked as a bouncer at a trendy club frequented by hip-hop musicians and fans. Black Sallie Blue Eyes, as he’s known (nearly everybody in this book has a nickname) isn’t a brilliant detective; he’s more the dogged investigator who keeps trying to unravel the strands of a complicated plot that involves drugs, money, wrestling, and high society. Naturally, some things that don’t appear to be connected at first glance turn out to be before everything is said and done.

Sometimes in a first novel, the actual writing is a little rough, and that’s the case here, especially early on as Blatte has a tendency to do too much telling and not enough showing. But the prose starts to flow better as the book goes on, and the pace steadily picks up. As I've said many times before, I like a book that has a distinctive voice, and this one does. The novel’s biggest strengths are its well-drawn characters, its funny lines of dialogue, and Blatte’s ability to turn a clever phrase. (Since he’s an award-winning songwriter, that ability isn’t too surprising.) There were plenty of twists and turns in the plot to keep me interested, and while HUMPTY DUMPTY WAS PUSHED is an entertaining yarn in its own right, it also shows a lot of potential for sequels. I hope Blatte brings back Sal Messina in future books. If he does, I’ll definitely read them.

Posted by James Reasoner at 8:58 AM

James, it would be interesting to hear what hip hop you like. I've liked the classic eighties, the so-called Old School stuff, but I'm especially fond of the late eighties-early nineties stuff, with jazzy grooves, and artists like Eric B. & Rakim, De La Soul and Def Jef.

The only name I can think of is Outkast. I guess they're considered hip hop. I've probably heard some of the artists you mention, because sometimes when I'm driving I listen to one of the local hip hop radio stations, but I don't know who does which songs. I enjoy most of what they play, though, when I'm in the right mood. My musical interests are pretty varied, though. I can listen to almost any kind of music and find something to enjoy in it.