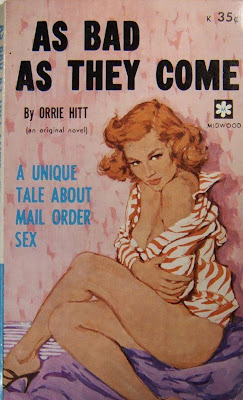 (A reader who calls himself Rittster made a couple of excellent comments on Frank Loose’s guest blog about Orrie Hitt, and I thought there was enough good information and opinion in them that they deserved a post of their own. Normally I would ask permission before doing something like this, but since I don’t have an email address for Rittster, I’ve taken the liberty of combining his comments and moving them up here. Rittster, if you have any objections, please let me know, and please email me anyway (the link is in my profile), as I have a question for you. Many thanks!)

I've been a Hitt Man (pardon the expression) for about two years, after being introduced to him by a dear and gracious bookseller friend named Jerry Chadburn. Ever since, I've been on an almost (almost? who am I kidding?) obsessive mission to buy every Hitt book and find any information about him I could. Here's my Hitt-cred at present:82 paperbacks and 1 hardcover. The paperbacks include those he wrote under his own name, the pseudonyms Roger Normandie and Nicky Weaver, and the lesbian-themed books he wrote as Kay Addams. The hardcover is called "Leased" and was co-written with Jack Woodford.I was also fortunate to find a lengthy interview with the Hitt children and a detailed bibliography from a copy of "Books Are Everything!" Vol. 5, No.1, Whole Number 21. The article has photos of Hitt, both alone and with his wife, numerous book cover photos, and is a more-than-generous 48 pages. As well, I managed to find an article written by The Man himself called, "My 'Sex' Books" from the magazine "Men's Digest" #31. Unfortunately, it's only half the article, the other half appeared in #32, which I have yet to find.

(Note: “Hardboiled sleaze” is the term I started using when trading emails with Frank Loose about Hitt’s work.)

I must disagree with the gracious guest host, and implore that Hitt did indeed often write with the intensity of Gil Brewer, and in fact with even more intensity than many a Gold Medal writer. Possibly my disagreement comes from the fact that I consider "I'll Call Every Monday" one of Hitt's weaker books. In fact, I don't think Hitt is at his best when using James Cain-type plots. To me, Hitt's best writing comes out of two types of stories. One type is about the tough guy who juggles as many dames as he can, while also throwing a ball in the air for a major scam at whatever job he happens to be working. The tough guy is usually too-clever-by-half, and the balls come tumbling down, whereupon whatever publisher Hitt was working for at the time made sure the tough guy saw the light, reformed, and married the one good girl he had ignored throughout the book. All this in the last 3 pages of the book! The other type is about what a nightmare it was to be a woman in the 1950's. In this type of book, the woman is just trying to claw her way out of the low-income gutter, but is screwed-over every way and by every guy she comes into contact with. The worst thing that can happen to a woman in this type of book is that she become an unwed mother. Hitt wrote about this nightmarish scenario with as much passion and intensity as Woolrich wrote about death and isolation. Truly The American Nightmare. I also think Hitt writes about low-income folks better than he does about folks living in the suburbs or the upper classes.

Here are the top ten on my "Hitt Parade" (not necessarily in order of importance): Race With Lust (as Roger Normandie)
5.The Sucker
6.Rotten To The Core
7.Warped Desire (as Kay Addams)
8.Teaser
9.Campus Tramp
10.Wilma's Wants (Published by Novel Books, who apparently allowed Hitt to bring out his political and philosophical side. I'd say Hitt was a fiscal conservative and a social liberal, with a pinch of Ayn Rand thrown in. While still having the same plot framework, I'd say the core of the Novel Books are significantly different from books Hitt wrote for all other publishers.)
If anyone wants any info from my Hitt articles or books I'd be happy to respond.

Posted by James Reasoner at 9:04 AM

Could this be the beginning of the Orrie Hit revival? Is Stark House listening?

I still haven't read any of the books, but judging by the comments of people who have, a Stark House double or triple volume might be a good idea.

I'm a huge Gil Brewer fan, so if this guy writes with as much intensity as Brewer I must give him a look.

When I finished reading I'll Call Every Monday, I decided to purchase some more Orrie Hitt books, but I knew I would be choosing titles "blind." Nice now to have some suggested titles to pursue. Thanks for the terrific information here. Rittster, you mentioned offering some more info on Hitt. I would like to get it. Can you email to me, please? fdloose@bellsouth.net

Is this the part where we all e-mail Hard Case Crime and ask that they bring one of his books back into print? We'll need a ring leader and pick one of the titles to suggest.....

Can someone tell me how to add my email address to my profile? I'd be very grateful.

I second the motion for an Orrie Hitt revival! It's long overdue. I think his writitng reveals as much, if not more, about what life was really like during the 1950's--the fear, the savagery, the maddening lack of options for women, the feeling of being (to borrow an Orrie title)Trapped--as Jim Thompson, David Goodis, and plenty of other more celebrated writers. You'll find not a hint of a "Leave It To Beaver" lifestyle in Hitt's world.

I make a motion for an Ennis Willie revival, as well. Willie's seemed like it might start about a year or two ago, with his appearance on a blog, an interview in Paperback Parade, and internet talk about re-printings, but publicly, not much has happened since then.

On the Blogger page where you can edit your profile, there should be a place to add an email address and a box to check to show that address in the profile. At least, that's the way it is in mine. If those options don't appear on your Edit Profile page, I don't know what to suggest, but maybe someone else does.

I strongly second the motion for an Ennis Willie revival. I've really enjoyed what little I've read of his work. People have been working behind the scenes for several years to bring this about, but so far no luck, at least that I know about. I haven't heard anything recently.

James, the book I have is on its way. Here's hoping it makes a safe journey.

I believe this could be more in the vein of Stark House than Hard Case.

Yeah, for some reason Hitt strikes me more as a Stark House author than a Hard Case Crime author, although of course there's some crossover between the lines (Gil Brewer, Day Keene, maybe others I'm not thinking of right now).

And Wade Miller. I knew there was somebody I was forgetting.

You can soon add, Peter Rabe to this Hard Case and Stark House cross over list... I was only half joking about having readers of the group of blogs that participate in the Friday Forgotten Books project, send a e-mail suggestion Hard Case....

I know that Charles Ardai of the HCC is open to suggestions and most likely will at least take a note on Orrie Hitt if people he knows suggest adding him in the HCC line.