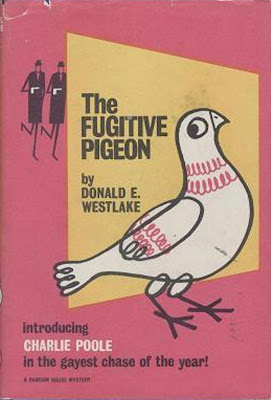 When Donald E. Westlake passed away at the end of last year, I don’t recall seeing any mentions of this book in the numerous tributes to him and his work. I think it’s an important novel, though, because it’s part of the transition in his career, the divergence between Westlake the comic crime novelist and Richard Stark the hardboiled novelist. THE FUGITIVE PIGEON is his sixth book, originally published in 1965. I haven’t read the two Westlake novels immediately preceding it, KILLY and PITY HIM AFTERWARDS, but judging by those titles, they don’t sound like laugh riots. I know the first three novels under the Westlake name (THE MERCENARIES, KILLING TIME, and 361) are hardboiled, because I’ve read them. So I’m guessing that THE FUGITIVE PIGEON is something of a departure, a book that still has some hardboiled elements (gangsters, hit men, crooked cops) but also a considerable amount of screwball comedy. As such, it provides a template for a lot of Westlake’s later work that mixes comedy and crime.

But, now that the pontificating is out of the way, how’s the book itself, you ask? Great fun, I’m happy to report. The narrator is Charlie Poole, an unambitious young man who’s perfectly content to run a neighborhood bar in Canarsie. The bar is owned by Charlie’s Uncle Al, who’s a mid-level gangster. Occasionally, Charlie has to hold a package at the bar for somebody until it’s picked up later, and while he suspects this has something to do with his uncle’s criminal activities, he never asks for details. He doesn’t want to know.

But then late one night as he’s about to close up, two strangers come in, and Charlie quickly realizes that they’re hit men sent there to kill him. He has no idea why anybody would send killers after him, but when he manages to escape with his life, he decides that he’d better figure it out in a hurry, because the two assassins are still on his trail. This is the beginning of a whirlwind three days in which Charlie tries to find out who wants him dead and why, an investigation complicated by the fact that he has to keep dodging the two hit men. Along the way he runs into a murder (for which he’s blamed, naturally) and a beautiful young woman (for whom he falls, naturally). It’s all very fast and entertaining and sharply plotted and written, and while there’s not much of the slapstick humor that shows up in Westlake’s later books, it’s pretty funny in places, too.

I really enjoyed this one a lot. If you haven’t read Westlake before, it wouldn’t be a bad place to start. If you’re a Westlake fan but have never gotten around to reading it, I highly recommend that you do so. Either way, you’re in for a treat.

Gotta love that "gayest chase of the year" tagline. I suspect it wouldn't get used these days.

What this book reminds me of is that by-gone era when I was in grad school at The University. The library had a wonderful mystery section, and the books got cataloged and put into the stacks with amazing speed. I'd read Boucher's reviews one week and find the books available the next, or so it seemed. That's when I started reading Westlake, and I think this was the first one I found. Those were the days.

Sounds good to me. I'll add it to my list. I'm in the midst of his Samuel Holt titles now.

I keep seeing this book at the library, and once I have caught up on my Westlake backlog it is at the top of my list of his books to check out.

Language does evolve, doesn't it?

When this book came out in 1965, there were at least five drugstores and grocery stores in the little town where I lived that had spinner racks full of paperbacks. What was great was that every store had a different selection, with very little duplication. I hit all of them on a regular basis, buying as much as I could afford.

Now the drugstores and grocery stores that even carry books have tiny sections, and the books are the same in all the stores. Other than that, there's Wal-mart.

And I'm starting to sound like a reactionary curmudgeon. But those really were the days, indeed.

I reread it a few years ago and really enjoyed it. He wasn't at his peak but he was getting there fast. A fine little book.

I have years of Westlake yet to read and that's a good feeling.

I think i read this when i was a teen. The title sure sounds familiar. Is there a scene where the protagonist is trying to get away from someone and jumps into a car with standard shift and has trouble working the clutch? He'd been driving automatics for several years. I could be thinking of a different Westlake book. He did write a few!

I think that must be a different book. I don't recall a scene like that in this one, and I just finished reading it yesterday. Of course, my memory isn't what it used to be!

James ... I just remembered the title of the book --- The Busy Body. I think it was written a year or so after The Fugitive Pigeon. If memory serves (didn't i just prove it doesn't!) the protagonist was a hit man or a gangster on some kind of mission which took him to a city where he had to rent a car, hence the standard shift transmission. Oh, well, mystery solved, though all i did was take us down a side road from your original post. At least it WAS a Westlake book!

KILLY sure ain't no laughing riot, but it's a good hardboiled crime novel.

I enjoyed this book when I first read it because I grew up in Canarsie and still lived there when I read it.

I just listened to a wonderful interview with him at http://www.wiredforbooks.org/