Tales From Deadwood: The Troopers 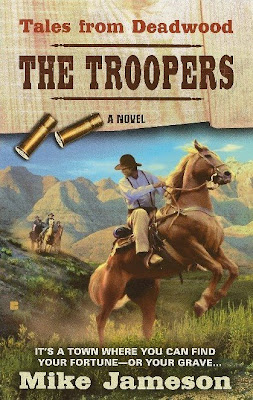 This book is either out now or soon will be. It's the most noirish of the four so far and works fairly well as a stand-alone. Still no word on whether or not there'll be a fifth book, but I hope so because I really enjoy working on this series.

I'm looking forward to this one. An excellent series.

Looking forward to this one also

I've read the first three and pre-ordered this one from Amazon. I do hope the series doesn't go the way of the TV series. Tell me James have you ever visited the real Deadwood?

I still have to get the first one in this series. I've never seen the HBO series.

Yeah, I've been to Deadwood once, long before I wrote these books, and didn't do much more than drive through it. It's very much a tourist town these days. Pretty country in the Black Hills, though.

These books aren't tie-ins to the HBO series, so you don't have to have seen it. I enjoyed it, though, and think it's well worth watching.

All got this sitting on my book shelf, think I picke it up about a week ago.

Fingers crossed the series carries on.

It may take me a couple of months but I'm looking forward to reading this.

Regarding series that end because a publisher stops publishing westerns or simply wants to end a series.

That's certainly true if you own the series in question, although from a practical standpoint it's very difficult these days to interest a publisher in a series that's been dropped by another publisher. They figure that if the series was doing any good, the original publisher wouldn't have dropped it.

In the case of the Tales From Deadwood books, the publisher owns that series and always has, so whether or not it continues is out of my hands.