Barnum! in Secret Service to the USA 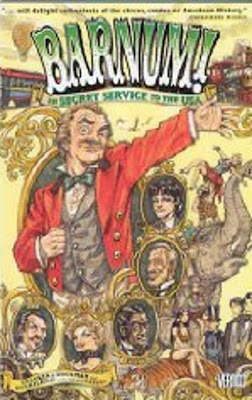 I’m still reading oddball graphic novels, and this one certainly fits in that category. Here’s the plot: Circus showman P.T. Barnum (who narrates) foils an assassination attempt on President Grover Cleveland, who persuades Barnum to go to work as a secret agent, along with some of the performers from his circus (his “Congress of Anomalies”). Barnum’s job is to stop the evil inventor Nikola Tesla from overthrowing the U.S. government. Helping him is a beautiful, cigar-smoking, female Secret Service agent named Firestone Kelly. Now, I suspect that most people’s reaction to that plot will fall on one of two extremes: either utterly stupid, or a whole lot of fun. I fall on the “whole lot of fun” end of the scale.

There’s a lot of THE WILD, WILD WEST to this one: colorful characters, grandiose plots, far-fetched scientific gimmickry. The story rips right along with cliffhangers and pulp-like escapes, a little romance, a little humor, and a general sense that the creators are having a great time. That usually means the reader will, too.

The script is by Howard Chaykin and David Tischman. I hadn’t heard of Tischman before, and Chaykin’s work has always been pretty hit-and-miss for me. I didn’t like his versions of THE SHADOW and BLACKHAWK, but he did a short-lived, very pulp-influenced comic book series called DOMINIC FORTUNE that was great. There’s an alternate version of Fortune that Chaykin did for another company that I liked, too. I think it was called THE SCORPION. Or maybe it was the other way around. That was nearly forty years ago, though I shudder to think of it. Anyway, I like what Chaykin has done here in collaboration with Tischman, and the art, by Nelo Henrichon (no, I’ve never heard of him, either) is very good, too. Overall, I think BARNUM! IN SECRET SERVICE TO THE USA is a fine graphic novel and recommend it to those of you who like the more offbeat stuff.

Posted by James Reasoner at 9:04 AM

I believe Chaykin did The Scorpion for Martin Goodman's short-lived Atlas Comics. After a couple of issues, the character was turned into a traditional super-hero drawn by Steve Ditko. Later, Chaykin revived the character as Dominic Fortune at Marvel.

Thanks for the info. Now that I think about it, I believe you're right, The Scorpion came first. I remember buying all those Atlas Comics from a newstand in Denton, Texas, while I was in college. I'll bet Bill Crider remembers that newstand on the courthouse square. The building is still there, but it's an antique mall now.

Chaykin did a series called "American Century" that's probably a little masterpiece that I think maybe myself and twenty other people read. Was all very pulpy, with a fresh smattering of left-wing politics.