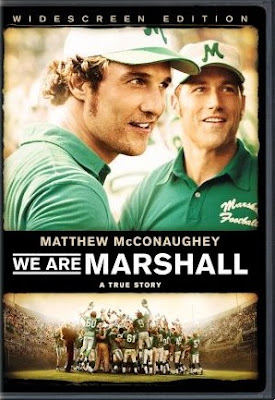 We hadn’t watched an inspirational, based-on-a-true-story sports movie for a while, so we gave WE ARE MARSHALL a try. It’s the story of what happened after a plane crash in 1970 wiped out all but four of the players on the Marshall University football team and all but one of the coaches. I remember quite well when this actually happened, but I didn’t follow the story the next year when Marshall resumed its football program with a new head coach and a team made up of freshman, sophomores, and walk-on players, so the rest of the story was new to me.

Although director McG, with his hipster sensibilities, would seem like an odd choice to helm an aggressively old-fashioned movie like this, WE ARE MARSHALL is slick, very well-made, and effective, even though it’s also somewhat depressing. The cast is excellent: Matthew McConaughey and Matthew Fox as coaches, David Straitharn as the university president, DEADWOOD’s Ian McShane as the father of one of the players killed in the plane crash. And the soundtrack is great, a cross-section of the songs I used to hear on the radio all the time in those days. (KXOL 1360 AM in Fort Worth, for those of you might care. There were two major rock stations in Fort Worth in those days, KXOL and KFJZ 1270 AM, and just like there were people who preferred the Beatles and people who preferred the Rolling Stones, there were KXOL listeners and KFJZ listeners, and very little crossover between the groups. At least among the people that I knew . . . but I digress.)

I wouldn’t put WE ARE MARSHALL in the top tier of inspirational sports movies, but it’s pretty entertaining and worth watching. The script springs a nice twist near the end that I liked a lot. If this is the sort of movie you enjoy and you haven’t seen it yet, you should definitely check it out.
Posted by James Reasoner at 2:32 PM

Thanks for mentioning this movie; it's all over HBO this month, and so far I have resisted. I will watch it soon.

I watched it recently and enjoyed it.

This is a wonderful movie that shows how one person can step up to the plate to help others through the grieving process. It takes courage and patience.