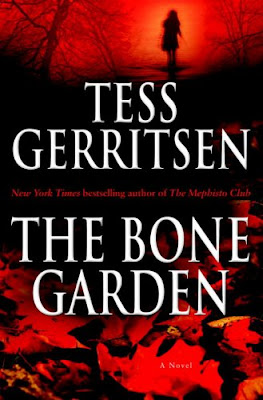 A couple of years ago I read two of Tess Gerritsen’s novels, GRAVITY and BLOODSTREAM, and enjoyed them both quite a bit. In fact, GRAVITY made my list of top ten favorite books that year. But for some reason I never got back to her work until now. Livia has read all of Gerritsen’s novels, and she told me that although Gerritsen’s series character, medical examiner Dr. Maura Isles, makes a cameo appearance in the latest one, THE BONE GARDEN, it’s primarily a stand-alone, so I decided to give it a try.

THE BONE GARDEN has a contemporary framing story about the discovery of an ancient skeleton buried on the property of recently-divorced Julia Hamill, but for the most part it’s a historical thriller set in Boston in 1830. The hero is Norris Marshall, a young medical student and resurrectionist who pays his tuition at medical school by digging up fresh corpses to sell to the anatomy instructor at the school. As you might expect, this is enough by itself to lead to some fairly gruesome scenes, but then Gerritsen throws in a masked and caped serial killer known as the West End Reaper, an epidemic of childbed fever that kills numerous women after they’ve given birth, gangrene, amputation, and assorted other horrors. The plot is pretty complicated, as Norris falls under suspicion of being the West End Reaper and has to work to clear his name, as well as to help a beautiful young Irish immigrant, Rose Connolly, who finds herself caring for her newborn niece after her sister’s death. Seems that on top of everything else, a group of mysterious individuals wants to lay hands on that baby, and they won’t stop at anything to achieve their goal.

Despite all that being packed into the book, at times it seemed to me that there wasn’t enough story to justify the length, but books being too long is a common complaint with me when it comes to modern thriller fiction and probably has more to do with my own tastes than with the books themselves. Gerritsen has a sure hand with characters and a way of really making the reader root for the sympathetic ones. She ties everything together pretty neatly at the end, too. While I don’t think THE BONE GARDEN is as good as the other two Gerritsen novels I’ve read, I enjoyed it quite a bit and wouldn’t hesitate to recommend it. I’m sure I’ll be reading more of her work.

On the writing front, Friday was an actual day off. I ran some errands, rested, read, watched some TV. Did nothing writing-related at all, unless you want to count stopping by Half Price Books for a little while and browsing the shelves. Today I got back to work and wrote 18 pages. I’m not real satisfied with the way this book is going so far, but I’m confident that I’ll whip it into shape.
Posted by James Reasoner at 6:32 PM

Thanks for your review. I have read all of Tess Gerritsen's books in random order, and my favourites are Harvest, Gravity, The Surgeon, and Vanish. Bone Garden would probably be next on the list - it's a good book, but the story from the past is much richer than the story in the present. And the ending - didn't get it - was she implying that Tom was a descendent of Marshall Norris (who died) - obviously Rose never was with child and that Julia was a descendant of Rose? Kind of strange, since Rose never had kids. Anyway, I found the historical nature of the book to be refreshing, though the amputation scene was perhaps the most graphically disturbing thing I've ever read in my life. Still, kudos to Gerritsen for producing something different, and I enjoyed this one far more than Mephisto Club (which is probably my least favourite Tess Gerritsen novel).