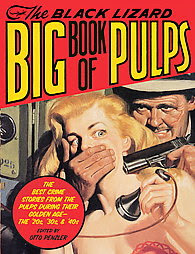 Most of you have heard about it. Some of you own it. A few of you have already blogged about it. But I got my copy of THE BLACK LIZARD BIG BOOK OF PULPS the other day, and it’s wonderful. Over 1100 double-column pages of hardboiled crime fiction from the Twenties, Thirties, and Forties. I am, as we say down here in Texas, in Hog City. I plan to read a story or two from this huge volume between every novel I read, so it’ll take me a while to work my way through it, but I can practically guarantee that I’ll have a great time doing so. So far I’ve read the first two stories, “One, Two, Three” by Paul Cain and “The Creeping Siamese” by Dashiell Hammett. The Cain story, about a private eye trying to find a swindler, isn’t as terse and bleak as a lot of his work, but it’s just as complicated. It takes a full page – that’s two columns of pretty dense type – at the end of the story just to explain everything that went on in the first nine pages. Great stuff. The Hammett story is a minor Continental Op yarn, but the Hammett voice is there and entertaining as always.

Unlike some things, I can pinpoint, sort of, when I became a fan of hardboiled pulp fiction like the stories included in THE BIG BOOK OF PULPS. It was on a very foggy December evening in 1967, when I picked up a copy of the Pocket Books edition of the Ron Goulart-edited anthology THE HARDBOILED DICKS at the Book Oasis in Fort Worth’s Seminary South Shopping Center. I was there with my mother, my brother, and my sister-in-law. I was aware of pulps before that, but only Doc Savage and the Shadow. When I read Goulart’s book, which included authors such as Frederick Nebel, Norbert Davis, Raoul Whitfield, John K. Butler, and Lester Dent, the stories immediately struck a chord in me that still rings as clear and true today as it did then. I’ve read a ton of hardboiled pulp mysteries in the past forty years, and a lot of work that was influenced by those stories, and I still love ‘em.

Today’s page count: 20. And the pages that I thought were terrible when I was writing them yesterday didn’t look so bad today. In fact, they were all right. They just needed a little polishing.
Posted by James Reasoner at 11:10 PM

Even the choice of paper for this wonderful, fat book is apt. It feels kind of pulpy, doesn't it?

I like that the introductions seem to assess the stories with a level head, without inflated claims. And I was especially pleased to find two stories by Norbert Davis in the book. I also had not known that Erle Stanley Gardner was that good.
==============
Detectives Beyond Borders
"Because Murder Is More Fun Away From Home"
http://www.detectivesbeyondborders.blogspot.com/

I was surprised at "One, Two, Three" - it was actually pretty funny, and I didn't remember it at all. I read Cain's SEVEN SLAYERS years and years ago, and this story didn't make an impression then.

The humor of "One, Two, Three" surprised me, as well. With the exception of Norbert Davis, one does not associate humor with the pulps.

Have you read Cain's Fast One? I posted a couple of coments about Paul Cain here, including one about "One, Two, Three," if you'd care to take a look.
==============
Detectives Beyond Borders
"Because Murder Is More Fun Away From Home"
http://www.detectivesbeyondborders.blogspot.com/

To echo what Graham said, I read SEVEN SLAYERS about fifteen years ago but had no memory of "One, Two, Three". I think it made a more lasting impression this time.

Peter, I haven't read FAST ONE, but it's been on my shelves for many years. Time to give it a try.

There are a lot of humorous stories in the Western pulps (and some that are supposed to be humorous but aren't), but yeah, not so much in the detective and mystery pulps.

I'm about 900 pages into this great book and haven't found a stinker yet. Sure, a few aren't very good IMHO, but who will like everything in a work this large? I try to read a story or two each night when I lie abed, and in this wise have been working my way through it.

I found the book at B&N a couple of weeks ago and have been trying to read a few pages before bed every evening. I've made it to page 178. I think I need to start going to bed earlier so I can do more reading!

I think there was lots of humorous stories in the detective pulps: D.L. Champion and William Cox (Dumb Danny stories) specialized in them. A totally forgotten writer called Russell Branch also had parody in his crime stories. And what about Chandler? Didn't he himself say that he writes parody?

I may have read one of the Cox stories, but I don't know the other writers you mentioned with the exception of Chandler, of course.

I thought of Chandler before I posted my comment, particularly the famous opening to "Red Wind." Everyone remembers the atmosphere of menace in the paragraph. I suspect that fewer people remember that Chandler ended it with a laugh line.

But Norbert Davis' stories emphasized the laughs in a way that Chandler never did, even in the byplay between Carmen Sternwood and Marlowe in The Big Sleep. That's what makes the best of Davis' work (or at least the best of what I've read) so surprising, even astonishing. He can go for belly laughs while maintaining a credible hard-boiled atmosphere at the same time. It's almost as if he challenged himself to maintain that difficult balance.

I remember an episode of THE MARY TYLER MOORE SHOW in which Ed Asner as Lou Grant reads the opening paragraph of "Red Wind" to Mary as an example of great writing. But he leaves off the last line, which to me is what makes the paragraph great writing. That always bothered me.

I definitely need to read more of Norbert Davis's work. I've liked everything that I've ever read by him.

Juri, I didn't realize D.L. Champion wrote humorous stories, too. All I've ever read by him are some of his Phantom Detective novels as G. Waymon Jones and Robert Wallace, and they're not humorous at all. I believe he actually created the character of the Phantom Detective. I know he wrote the first few novels in the series.

James, I don't remember that particular episode of The Mary Tyler Moore Show, so I don't know how Lou Grant's presentation of the reading was played. But the omission of the last line strikes me as very television-like, which is to say superficial.

One can debate whether the last line makes the paragraph, or whether it annoyingly undercuts what has gone before. Whichever one believes, it was pure Chandler, and omitting it is dishonest unless the omission itself is played for laughs.

For anyone who hasn't read "Red Wind" lately, here's that paragraph:

"There was a desert wind blowing that night. It was one of those hot dry Santa Anas that come down through the mountain passes and curl your hair and make your nerves jump and your sking itch. On nights like that every booze party ends in a fight. Meek little wives feel the edge of the carving knife and study their husbands' necks. Anything can happen. You can even get a full glass of beer at a cocktail lounge."

That Chandler quote is hilarious!

D.L. Champion had at least one long series in Dime Detective, the Mexican private eye, Mercado something.. okay, I'll look it up. It's Mariano Mercado. I've read some of the stories and they are great fun. Champion also had stories (or at least one story) about a bald, wig-using private eye Sheldon Spooner.

Mercado is in Thrilling Detective:

Thanks for the info, Juri. I hadn't heard of Mariano Mercado or Sheldon Spooner.

" ... and have been trying to read a few pages before bed every evening. "

It's perfect for that kind of reading. I'd say it's perfect for bathtub reading, too, but it may be a bit heavy for that. One is apt to drop a book that thick into the tub unless one has strong forearms.

FWIW, leaving off the last, telling line of the 'graph in the MTM SHOW episode was necessary for the scene since the whole point was for Grant to seem mildly machismically threatening (if still reasonably avuncular), for Moore/Richards to do her gulping little-lady discomfort act in return. Yeah, pretty shallow.

What the episode needed was for Ed Asner to deliver the paragraph with portentous seriousness, and then for Murray or somebody to wander into the newsroom and recite the last line, to a big laugh from the soundtrack machine.
===================
Detectives Beyond Borders
"Because Murder Is More Fun Away From Home"
http://detectivesbeyondborders.blogspot.com/