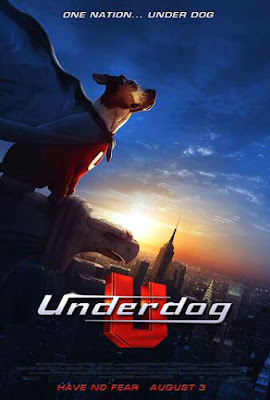 Okay, you may not believe me on this, but UNDERDOG is a pretty good little film. Sure, it’s a kid’s movie, and it’s based on a cartoon series that was remarkably primitive even for its time (and not in a charmingly minimalist sort of way, either). But in this live-action version, the dogs are cute, the script is funny, and so are Peter Dinklage and Patrick Warburton (one of my favorite character actors) in over-the-top performances as the villains of the piece. There are lots worse ways to spend an hour and a half.
Posted by James Reasoner at 1:13 PM

Yes ! I'm in total agreement with you, my family and I sat down during New Years day and watched Underdog and we all loved it. Very funny and expertly done. Told my wife and daughter we would have to go buy it to put in our library.

Patrick Warburton is fantastic. I had no idea he was in this. I will certainly have to watch this sometime simply because I was a big fan of the cartoon as a child.

I was actually a pretty big fan of Underdog. "The secret compartment of my ring I fill, with an Underdog super energy pill."