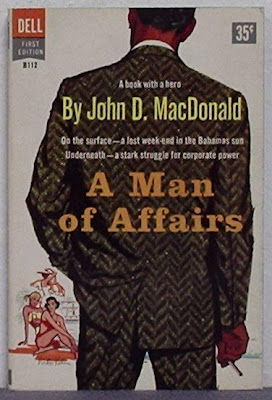 This novel is one of John D. MacDonald’s rare misfires. Rather than his usual crime or suspense yarn, it’s more of a mainstream novel concerning an attempted business takeover and for the most part takes place at a fabulous estate in the Bahamas belonging to a famous corporate raider. The narrator is one of MacDonald’s fallible but sympathetic heroes who tries to prevent the takeover. Meanwhile, there’s a variety of soap opera-like dramatics going on among the group of people that has gathered on the island.

I was tempted to give up on this one early on, but I stuck with it and ultimately was glad that I did. It’s certainly the worst JDM novel I’ve read, but there are enough good lines, enough examples of elegant writing, and enough effective moments that I consider it worth reading . . . barely. MacDonald was a good enough natural storyteller that the second half of the novel can’t help but pick up a little steam as it unfolds. If you’re a JDM fan, you can make it through A MAN OF AFFAIRS all right, but if you’ve never read his work before, you’d be much better off starting with almost any of his other novels. (I have to qualify that because I haven’t read all of them.)

Yesterday I had other stuff besides writing going on, so I only made it to the computer for a few hours. Wrote 7 pages during that time, and despite my early reservations I still think this book is shaping up fairly well. Circumstances are going to prevent today from being very productive, too, but I’m going to do what I can and not worry about it.
Posted by James Reasoner at 3:05 PM

Haven't read A MAN OF AFFAIRS in years. I vaguely remember that I didn't much care for it or A KEY TO THE SUITE, another JDM novel about corporate shenanigans. I presume he was alert to the market at the time for novels about big-business intrigue and the corporate rat-race (EXECUTIVE SUITE, MAN IN THE GRAY FLANNEL SUIT).

This was definetely one of his more meandering books, but I actually still enjoyed it because of the characters. Not a lot happened, though admittedly.