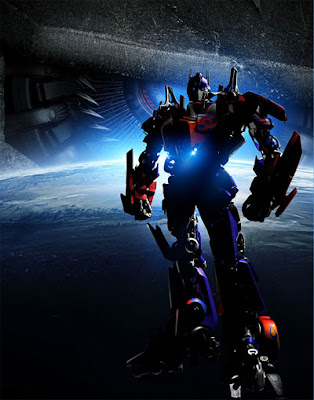 This movie got quite a few positive reviews when it came out, although a lot of them were of the slightly snide “I can’t believe this movie is really pretty good” type. And it certainly did well at the box office. So, considering that I’m usually a little out of step with both the critics and the viewing public, it doesn’t come as a great surprise that I didn't like it all that much.

Not that TRANSFORMERS is a terrible film. It’s not. There are some funny lines here and there in the script, the human performers, especially Shia LaBeouf, do a fine job, and the ending is pretty stirring. I’m a sucker for plots where the earth and the puny humans who live here find themselves in the middle of a galactic war. But ’way too much of the film is badly lit, choppily edited, and difficult to follow what’s going on. Sure, the special effects are spectacular, but that doesn’t help much when you can’t tell which are the good robots and which are the bad robots and can’t keep track of what they’re doing.

Or maybe I was just too tired and cranky when I watched it. I’m getting to the point where these special effects laden films just don’t do much for me most of the time. TRANSFORMERS is watchable and mildly entertaining in places, but that’s about all.
Posted by James Reasoner at 11:00 PM

Awww, you just went to see it because the good guy leader-robot with a Martyr complex talks like John Wayne. :-)

I wasn't crazy about the Love-Bug moments where the robot car tries to get the guy and the girl together. This belongs in a Herbie movie, not Transformers.

It's like every ten minutes, I said to myself, "there's no way it can get dumber than this." And without fail, every ten minutes it happens: a robot urinates on a guy (props to Hollywood for showing us something we've never seen before) is followed by "Megatron is responsible for the 20th Century."