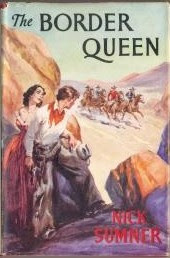 Here's an excerpt from an email a friend sent to me today:
"Incidentally the copyright records have turned up a western pseudonym I had not seen before - though I had assumed it probably was. Nick Sumner, author of three westerns in the 1950s, turns out to be a woman, Nancy Salomon. Attribution and spelling confirmed by her publisher's archive (Dodd and Mead). But that is all I know. I don't suppose you have ever come across her? It would be nice to know what else she did as well as write westerns."
And from a later email concerning Salomon's Western novels:
"All were originally hardbacks from Dodd and Mead. 'Border Queen' then appeared from Pennant in 1954, 'The Boss of Broken Spur' from Bantam in 1957, and 'Bullet brand' from Dell in 1954.

All three were published here by Robert Hale, 1955-56, and one 'Bullet brand' was published in paperback by New English Library in 1966. Quite well published for an unknown author - at least today.

We did find a Nancy S. Salomon, born 1917, who died in 1991, Possibly her, but as she died in New York City an obituary seems a faint possibility. She is not in the New York Times obituaries."
I have to admit that I never read any of the three Nick Sumner novels and don't recall ever hearing of them before now. All three of the paperback reprints are available on ABE for relatively low prices. The only Nancy Salomon book listed there is a crossword puzzle book published within the past few years, so almost certainly not by the same Nancy Salomon. I'm tempted to order one of the Westerns because I'm always interested in obscure authors, but I don't know . . . If anybody has read any of them, or knows anything else about Nancy Salomon, I'd love to hear about it, and so would my friend.
Posted by James Reasoner at 11:04 PM

I can't put you on the trail of "Nick Sumner", but I would suggest you don't dismiss the crossword lead entirely.

If she was born in the late twenties or early thirties, she'd be over 70 now, but that doesn't sound too bad. Mailer wrote his last novel over 80 and Saul Bellow had a baby when he was 84!

Nancy was my aunt (actually my mother's best friend for 40+ years, but to us she was Aunt Nancy). I'll try to summarize a bit. The NYC 1991 Nancy is the one you're looking for. She had a Masters in English, and was writing a mystery -- we don't know what happened to it when she passed away. She loved Ireland, Scotland and Wales, and spent most of her vacations there. She had every Clancy Brothers album, loved mysteries, especially Agatha Christie, and always brought the best presents to us kids at Christmas (though she was a non-practicing Jew).