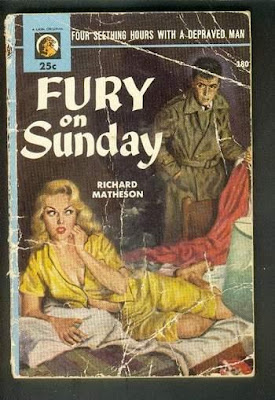 A while back I read and enjoyed Richard Matheson’s first suspense novel, SOMEONE IS BLEEDING, originally published by Lion Books in 1953. Now I’ve read his second novel, FURY ON SUNDAY, also published by Lion in 1953, and I liked it even better.

I have a fondness for books that take place in a short period of time. Everything in FURY ON SUNDAY happens during a four-hour span, in the wee hours of a Sunday morning. The plot is pretty simple: crazed pianist Vincent Radin escapes from the insane asylum where he’s locked up and sets out to kill the two people who have most wronged him, his former manager and the man who wound up marrying the woman Vincent was in love with when he went mad. Matheson cuts back and forth relentlessly between this handful of characters, creating a very effective atmosphere of suspense. His prose is pared right down to the bone, as it needs to be in a book of this type where the pacing is so important. It works here, whereas I thought the writing was rushed and sketchy at times in SOMEONE IS BLEEDING.

This novel is rare in its original edition but easily available in the Forge Books omnibus NOIR. It’s well worth reading.
Posted by James Reasoner at 10:49 PM