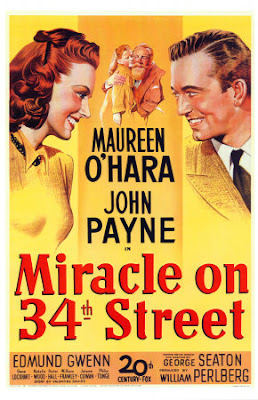 After watching the dog show this afternoon I decided to stick around and watch NBC’s telecast of MIRACLE ON 34TH STREET, since I haven’t seen it in quite a few years. I’ve liked this movie ever since I first saw it as a kid, and I still think it’s not only a good Christmas movie but a very good film, period. Of course, I like just about any movie with the gorgeous Maureen O’Hara in it (MIRACLE’s one drawback is that it’s in black-and-white, so you can’t see her red hair). But the rest of the cast is great, too, with Edmund Gwenn and John Payne being backed by a fine stable of character actors, many of whom, like Jack Albertson and Percy Helton, are unbilled. The script is sharp and funny and touching. Other than the abundance of commercials, I had a great time watching this one again.

All this reminds me that the first time I saw MIRACLE ON 34TH STREET was almost certainly not at Christmas-time, but more than likely in the summer. When I was a kid one of the local TV stations ran an old movie at 8:30 every morning during the week, and another one at 3:30 in the afternoon. I was a regular viewer of those movies when I was out of school during the summer. Since this was the Sixties, most of those “old” movies were from the Thirties and Forties. Whoever picked the movies didn’t care whether or not they were seasonal, so you might see MIRACLE ON 34TH STREET or IT’S A WONDERFUL LIFE or any other Christmas movie at any time of year. I didn’t care. If the movies were good I liked ’em anyway.

And while I’m on the subject of Christmas movies, I don’t know if we’ll have a white Christmas this year – they’re rare around here – but today we got something even more rare: a white Thanksgiving. That’s right, it snowed here today, two days after we set a record on Tuesday when the high temperature was 84. That’s Texas weather for you. Of course, the snow didn’t stick since it’s not below freezing, but it was coming down pretty thick for a while, and great big flakes, too. Made for a nice beginning to the Christmas season.
Posted by James Reasoner at 5:41 PM