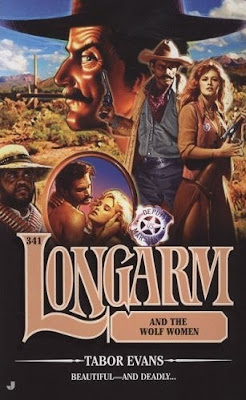 One thing about writing for a house-name series, unless there’s some continuity involved that you have to keep up with, you tend to be less interested in reading other authors’ entries in that series. At least, that’s the case with me. And I certainly don’t read somebody else’s book in a series while I’m trying to write a book in the same series. That just leads to overload.

For that reason, I don’t read many Longarm novels anymore. However, I get in the mood for one now and then, since I was a Longarm fan for years before I began writing them. So recently I picked up LONGARM AND THE WOLF WOMEN, #341 in the long-running series. Longarm (who is actually Deputy U.S. Marshal Custis Long, for those of you who don’t know) is assigned to track down a crazed mountain man and the mountain man’s two beautiful but equally vicious daughters who have been murdering prospectors in Colorado. It’s a simple plot, but the author who’s behind the Tabor Evans house-name this time around makes the most of it by throwing in some other off-beat characters and a lot of very well-written action scenes and humorous dialogue. This novel reminded me somewhat of the movie BANDIDAS, for those of you who liked that, and I happen to know it’s one of the actual author’s favorite films.

I also know who wrote this book, but I’m not sure if he wants to be publicly identified or not, so I’ll err on the side of discretion. I’ll certainly be looking for more of his Longarm novels, and if you’re in the mood for a good series Western (besides the ones I write, of course), I recommend LONGARM AND THE WOLF WOMEN.
Posted by James Reasoner at 10:51 PM

wolf women? Sounds kinky. I might have to give this one a try.

Definitely a mite kinky. In a good way, of course.

Wow, that's a great title, isn't it? I'll have to check it out. I haven't read any of the Longarm series before.

When will your entry in the series be published?

My next regular Longarm is LONGARM AND THE HANGTREE VENGEANCE, which comes out in January or February. But the Longarm Giant that's out now, LONGARM AND THE GOLDEN EAGLE SHOOT-OUT, is one of mine, too. I've done a bunch of them, dating back to 1992.

Is there a good reason the publishers don't want the authors identified? Do they think it would make any difference in sales?

At the very least, an acknowledgment on the copyright page, ala the Executioner books, would be nice.

Somewhere along the way somebody must have decided that series books would sell better with a house-name on them, since it's such a long-standing tradition in that area of the publishing industry. I've never seen any statistics to prove the case one way or the other. I'd like to see a copyright page acknowledgment, too, but I don't think it's going to happen on the Westerns. Some authors have a habit of dropping little clues into their manuscripts, though, so sometimes an observant reader can tell who wrote what, or at least make an educated guess.

By the way, the author of LONGARM AND THE WOLF WOMEN told me he didn't mind being identified, and some of you probably know already that it's one of Pete Brandvold's entries in the series. I plan to read another of his Longarm novels soon.