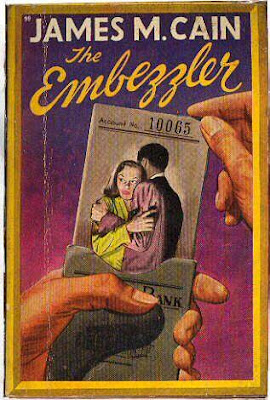 James M. Cain is one of those authors whose work I haven’t sampled extensively, nor do I know all that much about him and his career. More than a quarter of a century ago I read his novels THE POSTMAN ALWAYS RINGS TWICE and SERENADE and liked them both, especially POSTMAN, which is still one of my favorite noir novels. I have Roy Hoopes’ massive biography of Cain but haven’t read it yet.

I decided to try another of his novels, and when I looked around I realized I had THE EMBEZZLER in three different editions: its original appearance in the hardback omnibus THREE OF A KIND, the Avon paperback reprint shown here, and the excellent Gorman and Greenberg anthology PULP MASTERS, which is where I actually read it.

THE EMBEZZLER is narrated by Dave Bennett, a likable and bright-but-not-too-bright former college football star who’s the vice-president of a California bank. He falls in love with the wife of the head teller who works for him, and it just so happens that said teller has been steadily embezzling money from the bank. Dave and the sexy Sheila set out to deal with both of those problems, and you just know things aren’t going to work out the way they intend. Sure enough, every twist of the plot just makes things worse for them, until things get desperate enough for gunplay and a considerable amount of slam-bang action.

This is a short novel in the best sense of the term, with plenty of plot and character but not an ounce of padding. Cain moves the story right along and never lets the reader’s interest flag. I saw the major plot twist coming before it got there, but the ending took me a little by surprise. I thought it worked really well, though. I don’t know how this book ranks in the general consensus of Cain’s body of work, but I really enjoyed it and Ed Gorman’s intro to it in PULP MASTERS makes it clear that he did, too. I’ll be reading more of Cain’s novels, and I hope it won’t be another twenty-five years before I get to the next one.
Posted by James Reasoner at 10:42 AM