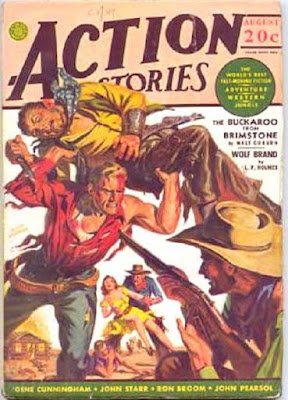 WOLF BRAND is a short novel by L.P. Holmes that first appeared in the August 1942 issue of ACTION STORIES (with a cover by Norman Saunders) and was reprinted in the hardback duo DOOM PATROL, which is where I read it. I’ve mentioned numerous times that Holmes is one of my favorite Western authors, and as expected, he didn’t let me down with this one.

As usual with one of his stories, the plot is traditional: The railroad has come to a valley that’s shared uneasily by cattlemen and homesteaders, and when the evil railroad manager tries to swindle the settlers out of their land, it sets up a clash between different factions of cattlemen, one led by Henry Marsten, who hates the homesteaders and wants them out of the valley, even if means siding with the shady railroad deal, and our Stalwart Hero Vike Gunnison, to whom fair play is more important than whether you raise cows or crops. So we have cattlemen vs. homesteaders, cattlemen vs. cattlemen, and an evil railroad boss trying to take advantage of the situation who brings in a hired gunman and his gang of killers. Shootouts, raids, and the sort of brutal fistfight that turns up in a lot of Holmes’ yarns ensue. Oh, and two beautiful young women for Gunnison to choose between. There’s a late twist that’s not really unexpected, but it works very well.

I had a wonderful time reading this one. Holmes may not have pushed the boundaries of the genre, but he did a great job of working within them. WOLF BRAND is packed with incident and well-developed characters. Vike Gunnison is a likable but pretty standard hero, but the women in his life are complex enough that the romantic triangle aspect of this book is particularly effective. Not all the characters turn out to be as good or bad as you might expect, either. And the action scenes are great, including that fistfight and some epic gun battles.

If you’re a fan of traditional Westerns, I can’t recommend the work of L.P. Holmes highly enough. WOLF BRAND is a top-notch yarn, one of the best I’ve read by him so far.

I think I've read Holmes's work in other fields over the years. Perhaps it was western fiction, though. This does sound good.