Tragon and the Scorpion Woman . . . and Other Tales - John M Whalen 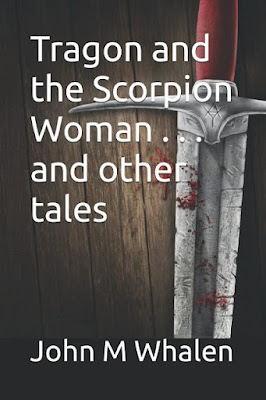 Several years ago, I read and greatly enjoyed John M. Whalen’s sword-and-sorcery novel TRAGON OF RAMURA. Tragon is the captain of the trading ship Orion, and while sailing the seas of his world along with his first mate and best friend, the desert warrior Yusef Ali Ahmed Nazir, they encounter all sorts of danger and adventure. His latest book, TRAGON AND THE SCORPION WOMAN . . . AND OTHER TALES, is a collection of eight stories originally published in various small press magazines and anthologies, five of which feature Tragon and Yusef.

The Tragon stories are straight-up sword-and-sorcery, the classic stuff that I’ve loved for more than fifty years now. Tragon has a mortal enemy, the evil wizard Caldec, who has taken over his homeland of Ramura. Tragon would like to overthrow him, which in the title novella leads him to explore the far northern reaches of his world in search of the legendary Scorpion Woman, a Medusa-like being with scorpions for hair instead of snakes whose gaze can turn a man into salt. Whalen throws an unexpected twist in the plot, as he does in nearly all of these stories. Just because they’re in the classic sword-and-sorcery style doesn’t mean they’re predictable. Whalen is a skilled author with plenty of tricks up his sleeve.

In the other stories, Tragon and Yusef encounter political intrigue, giant flying monsters, undead warriors, a beautiful but evil sorceress, and lots and lots of action. It’s highly entertaining, with echoes of Robert E. Howard, Edgar Rice Burroughs, John Jakes, and Lin Carter (especially his Thongor series). But Whalen has his own voice and his own spin on things, and I can definitely see myself reading these stories while sitting on my parents’ front porch on a summer morning with Top 40 rock playing on the transistor radio I set on the porch beside me. That’s right, TRAGON AND THE SCORPION WOMAN is a Front Porch Book, without a doubt.

But in addition to classic sword-and-sorcery, you also get a tale of ancient Atlantis with some excellent worldbuilding. I’d love to see more in this setting, but the ending of “Bride of the Sea” kind of precludes that, as you might guess. Of course, Whalen could always write some stories set before this one . . .

“Where There Be No Dragons”, a story about a hunter’s quest to kill the dragon that destroyed his village, is another tale in which you think you know where the story is going, but there’s a surprise waiting. The collection wraps up with “The Hostage of Maldon”, a straight historical adventure yarn about one of the many Viking invasions of England. There are no supernatural elements in this one, but it’s packed with almost non-stop action, and the battle scenes are magnificent. I was reminded of REH’s historical adventure stories while reading this one.

Overall, TRAGON AND THE SCORPION WOMAN . . . AND OTHER TALES is a top-notch collection, and I had a great time reading it. It’s available in both paperback and e-book editions, and I give it a high recommendation, especially if you’re a sword-and-sorcery fan.

Thanks very much, James. Glad you liked it. Your comments on the individual stories mean a lot. Much appreciated.

I must have this. One copy sold.