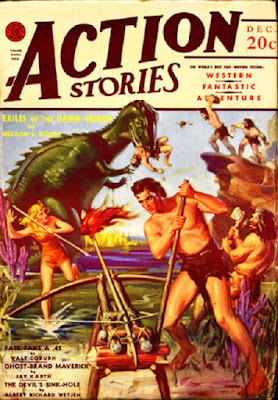 The novelette "The Devil's Sink Hole", published in the December 1940 issue of ACTION STORIES, is the longest of the Stinger Seave stories by Albert Richard Wetjen. It's set late in Seave's career as a somewhat shady trading ship captain in the South Seas. Tired of pursuing Seave for his criminous past, the governor of New Guinea decides to try a new tack: he recruits Seave to be a magistrate and sweetens the deal by offering to assign Seave to the job of cleaning up the most lawless island in the Pacific. There's no way the Stinger can turn down the promise of that much action, so he reluctantly becomes a force for law and order.

The fact that his old nemesis, Larsen of Singapore, is behind most of the trouble on the island is an added bonus. Maybe this will be the final showdown between these two old enemies!

You'll have to read the story to find out, though, which you can because the issue of ACTION STORIES in which it appears is available on the Internet Archive. I continue to enjoy this series a lot. Wetjen does a great job of capturing the tropic setting, and the overall tone is very hardboiled. There are two stories to go, and I expect I'll be getting to them soon.