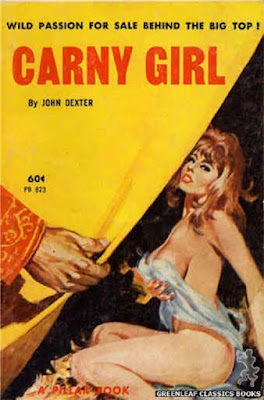 Almost everyone who wrote softcore novels for the operation set up by publisher William Hamling and agent Scott Meredith had books published under the name John Dexter at one time or another. It was a true house-name. The actual authors have been identified on some of them, but at this point we have no idea who wrote CARNY GIRL, published as part of the Pillar Books imprint in 1964.

It starts off with a nude, beautiful young woman who finds herself on a beach with amnesia. She has no idea who she is or what she’s doing there. All she knows is that she’s mortally terrified of something and has to get away. As luck would have it, a traveling carnival is stopped on a road nearby because one of the trucks has a flat tire, so, since it’s the middle of the night, our heroine is able to sneak onto the merry-go-round and hide. Of course, she’s discovered in the morning and winds up joining the carnival, working as a shill for some of the games and in the girlie show. She also falls for the handsome but down on his luck owner of the carnival and battles against an inexplicable (amnesia, remember?) nymphomania that makes her go to bed with most of the men she encounters. Eventually she comes to be haunted by the mystery of her past, especially when she finds out the authorities are looking for a girl who matches her description. And then a hurricane blows in on the Gulf Coast where the carnival is set up . . .

Like most of these books, CARNY GIRL reads quickly and is entertaining. I like carny novels in general, and this one focuses quite a bit on that colorful background, although the nymphomania is the main plot element, of course. But it’s also frustrating (also common for these books) because with that set-up and if the sex had been toned down some, this could have been an excellent hardboiled novel published by Gold Medal or as half of an Ace Double. Whoever this John Dexter was, his prose is pretty smooth and there’s some good dialogue.

But there’s no point in lamenting what might have been, and anyway, who am I to judge? The author got paid a quick thousand or twelve hundred bucks (significant money in 1964), did his job in a professional manner, and I assume was happy to cash the check. I’m sure the thought that somebody would be reviewing this novel nearly 60 years later never crossed his mind. CARNY GIRL is no lost classic, but I enjoyed reading it and for me, that counts more than anything else.