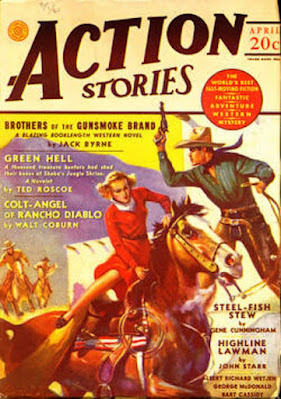 “Atoll of Death”, from the April 1941 issue of ACTION STORIES, is the shortest yarn in the series, a simple tale of Stinger Seave venturing to an isolated island to track down a brutal trader who owes him a small debt, less than five pounds, for some supplies he took but refused to pay for. Oh, and the guy shot the Stinger’s clerk in the arm when pressed for the money. That was a mistake.

The first half of this story reads almost like an undeveloped outline, with Wetjen doing a lot of telling rather than showing, but it picks up considerable steam once Seave reaches the island where his quarry has gone hunting a gold mine and gotten in trouble with the natives. (Again with the gold mine! I had no idea those South Seas islands had so much gold on them.) The ending is pretty satisfying.

This is definitely the most minor entry in the series so far, though. None of the supporting characters appear (Big Bill Gunther is mentioned once), and there are few, if any, hints of the bigger storylines that Wetjen evidently never got around to writing. But there’s some nice action, the setting is vividly drawn, as usual, and it’s worth reading because the Stinger is such a good protagonist. There’s only one more story in the series, and I’ll be getting to it soon.