From the Files of . . . Mike Hammer - Mickey Spillane and Ed Robbins 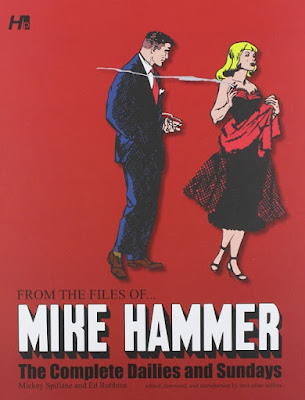 As a Mickey Spillane and Mike Hammer fan for more than fifty years, I was surprised that I didn’t even know this book existed until recently. Published by Hermes Press in 2013, FROM THE FILES OF . . . MIKE HAMMER reprints the Mike Hammer comic strip that ran for less than two years in 1952 and ’53 and is still available in both print and digital editions.

Editor Max Allan Collins provides the usual fine introduction, covering the background for the strip and information on who did what. The art is by Ed Robbins, an artist I’m not really familiar with, but he does a great job all the way through, with superb storytelling and a version of Hammer that just looks right. Mickey Spillane provided plots and contributed to some of the scripts, and Robbins handled much of the writing as well as the art. Veteran comics scripter Joe Gill worked on the strip early on but didn’t last long.

Although the strips ran in the usual daily and Sunday form, with different storylines in each format, this volume collects them in different sequences. In the first daily continuity, “Half-Blonde”, Mike Hammer, always the champion of the underdog, investigates the murder of a bum. Not surprisingly, the case turns out to have a much larger scope than that. While in the hospital recuperating from injuries suffered during that case, Mike finds himself involved in the mystery of “The Bandaged Lady”. In “The Child”, he’s hired to rescue the kidnapped child of a mob boss.

The title of the next daily continuity, “Another Lonely Night”, harkens back to what many, including myself, consider Spillane’s best novel, ONE LONELY NIGHT. In this one, Mike is targeted for death by mob killers after he witnesses a gangland execution. “Christmas Story” is a minor but predictably heart-warming tale in which Mike, feeling like Scrooge, corrals a shoplifter dressed as Santa Claus. Finally, in “Adam and Kane”, Mike has an actual client for once, an elderly criminal who hires him to locate his long-estranged son.

The title of the first Sunday storyline is “Comes Murder”, which, as Collins explains in his introduction, is designed to fit with the strip’s overall title: “From the Files of Mike Hammer . . . Comes Murder”. It’s likely that Spillane scripted this story himself. It certainly reads like his work. Mike protects a young couple from a vindictive gambling kingpin, but there’s more to it than a bad debt. He gets a hand in this case from a beautiful blond Amazon who may or may not be trustworthy.

Another beautiful blonde figures prominently in the plot of “The Sudden Trap”. Mike is passing through a small town when he spots a Hollywood starlet who’s out of place there . . . especially since she was believed to have been killed in a car wreck two years earlier. Mike’s curiosity won’t allow him to move on until he’s solved the mystery of her true identity.

The third and final Sunday continuity is the aptly named “Dark City”, in which Mike gets mixed up in the dangerous affairs of a beautiful redhead and her shell-shocked Korean War vet brother. Several panels in this story are considerably more suggestive than most comic strips were in those days, and it’s thought that may have contributed to the strip’s cancellation. I’m just glad Spillane and Robbins were able to finish the storyline. It wraps everything up in a downbeat but effective manner.

I really had a fine time reading this book. It brought back a lot of memories of racing through Mike Hammer novels in study hall at school, on my parents’ front porch, and at my sister’s house. The art is good, the scripts are top-notch, and I can’t imagine any Spillane fan not enjoying this collection. FROM THE FILES OF . . . MIKE HAMMER gets a very high recommendation from me.