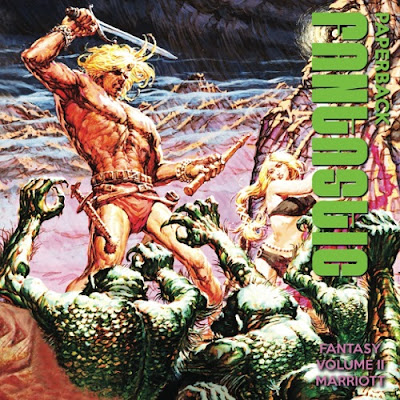 Most of the reviews are of heroic fantasy/sword-and-sorcery novels and story collections, with a few side ventures into sword-and-planet and more literary fantasy. Given that, it’s not surprising that books by Robert E. Howard, Karl Edward Wagner, Michael Moorcock, and Fritz Leiber dominate the table of contents. Howard is one of my all-time favorite authors, of course, so that’s fine with me, and I read all of Leiber’s stories about Fafhrd and the Gray Mouser back in the day, as well. I’m less familiar with Moorcock and Wager, although I’ve read and enjoyed both. There are also reviews of books by John Jakes and Lin Carter that I recall reading with great fondness, and a couple of reviews of books by an author I want to read, C.L. Werner, although I haven’t gotten around his work yet. Two of Kenneth Bulmer’s heroic fantasy novels are reviewed, including the first book in his long-running Dray Prescot series, and although I’ve read and enjoyed several of Bulmer’s historical novels, I’ve never read his fantasy. I need to get around to those books, as well.

I enjoyed Volume Two of this series every bit as much as I did Volume One, and for the same reason: it’s well-done, very informative, and highly entertaining. If you’re a long-time reader of heroic fantasy like I am, you really should pick it up, because I think you’ll have a fine time reading it.

Thanks for the heads-up, James. I will be getting this one.

I think you'll really enjoy it.