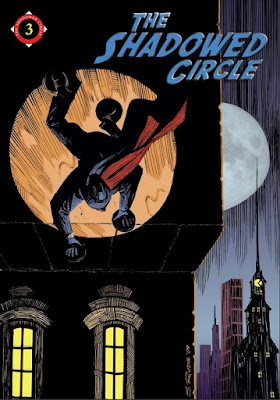 THE SHADOWED CIRCLE #3 more than lives up to the high standard set by the first two issues of this journal devoted to the iconic character The Shadow. As I’ve mentioned before, I’ve been a fan of The Shadow for close to sixty years now, and I never tire of reading not only his adventures, but also reading about the character in his many incarnations.

This issue starts off with a great cover by legendary comic book artist Steve Rude, with some modifications by Steve Novak. The first article, by Albert J. Emery, delves into The Shadow’s involvement with World War II and asks a simple but compelling question: Why didn’t The Shadow just kill Adolf Hitler? Emery does a fine job of exploring this subject. (This article also mentions novelist E.L. Doctorow, who, as a editor at Signet in the early Sixties, was the editor on the American editions of some of the Carter Brown mystery novels, a completely irrelevant fact that’s always interested me, anyway.)

Todd Severin and Keith Holt give us Part Two of their history of The Shadow’s pulp magazine, which covers that publication all the way to its end. It’s interesting and well-written and features an illustration by the late Frank Hamilton, whose great artwork has graced so many pulp fanzines over the decades. I’m always happy to see his work again.

Will Murray contributes an article about his experiences as a writer for Starlog covering the filming of the Shadow movie starring Alec Baldwin. I remember enjoying the movie overall, despite having some real problems with the script. The look of it was almost perfect in some respects, though, and Murray’s recollections are a lot of fun.

Tim King writes about one of the supporting characters in the pulp series, the communications expert Burbank, and speculates on how Walter B. Gibson came up with that name. King makes an excellent case, too, and I strongly suspect that he’s right.

There’s a fine interview with writer and producer Michael Uslan, conducted by Darby Kern, that sheds some light on the DC comic book series from the Seventies that featured The Shadow, a series that I bought, read, and enjoyed a great deal. Uslan seems like a really nice guy, as well as a top-notch writer.

It's hard to review a book of reviews, but Steve Donoso does so with his review of John Olsen’s THE SHADOW IN REVIEW. I was a fan of Olsen’s website where some of this material ran originally, and Donoso’s review of the book prompted me to order a copy.

Tim Hewitt rounds out the issue with a look at the Canadian issues of The Shadow’s pulp magazine, including some similar but different covers. I knew nothing about this part of the magazine’s history, so I was both educated and entertained.

All in all, editor Steve Donoso and his crew have produced the best issue so far of THE SHADOWED CIRCLE. I have a feeling they’re just getting started. You can subscribe on the journal’s website or buy individual issues on Amazon, and be sure to check out their Facebook page, as well.