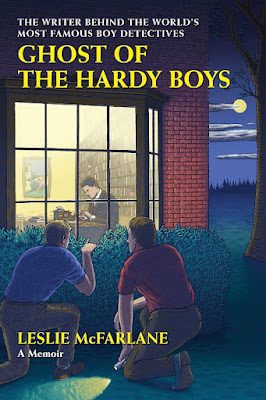 When I was a kid, my older brother owned a book called THE SHORT-WAVE MYSTERY. Although I never really discussed the matter with him, I assume he had the book because he was a ham radio operator and was interested in all things connected to short-wave radio. I wasn’t interested in short-wave radio (I tried for a while to learn Morse code but was an abysmal failure at it), but the book had the word “Mystery” in the title and promised action and adventure, so I read it.

That was my introduction to the Hardy Boys.

I thoroughly enjoyed the book and quickly realized there were dozens more entries in the series to be found on the shelves of the school library, as well as in the local public library. I read them all and enjoyed them and bought some of the new volumes coming out then with their bright blue covers. It didn’t take me long to figure out that I didn’t like the new ones nearly as much as the older ones. Even the ones that were supposed to be older, some of the first in the series, in fact, were missing something, and a close reading of the copyright page told me what it was. These were rewritten books, not the originals at all. Not fair! I wanted the real thing. I wanted the chums and the roadsters. Even at that relatively early age, my tastes in fiction already tended toward the older stuff. So I refused to read the rewritten versions and sought out the originals, although I grudgingly read the new ones currently being written in the mid-Sixties. All this made me pretty sure that the author, Franklin W. Dixon, maybe wasn’t a real guy. I already had a tenuous grasp on the concepts of pseudonyms and house-names. But I never really wondered who the actual author was.

By the Seventies, it began to be generally known that the author of those early Hardy Boys books was a man named Leslie McFarlane. He even wrote a memoir about those days called GHOST OF THE HARDY BOYS. I had a copy of that original edition, published in 1976, but never got around to reading it before it was lost in the Fire of ’08. I thought about replacing it from time to time and checked to see what used copies were going for on-line, but they were all more than I wanted to pay. Then I discovered that it was reprinted earlier this year, and that edition was much more affordable. So I got a copy and finally read GHOST OF THE HARDY BOYS.

It’s a wonderful book. McFarlane’s style is fast and funny and very readable, which is no surprise considering how I devoured those Hardy Boys books he wrote. He starts with a little personal background and then launches right into the tale of how he started working for the Edward Stratemeyer Syndicate in the first place and eventually got the assignment of launching the Hardy Boys series. The middle section of the book does sag a little as McFarlane flashes back to his childhood and adolescence and tells us probably more than we need to know about the little town in Canada where he grew up, but it’s still pretty interesting because he was a good writer and does a fine job of recapturing that time and place.

Then he finishes strong with more chapters on the Hardy Boys and the rest of his career. There are plenty of insightful comments about the life of a writer, especially the life of a writer who spends a lot of his career turning out popular fiction under other names. I had to nod in agreement with him a lot of times, especially when he talks about how, if you’re going to take the money to do a job, you ought to do the best job you can. I get really annoyed when I read a house-name book and can tell that the writer thinks he’s slumming and can just slap something out. The limits of my talent may keep from accomplishing what I’m trying to do at times, but I’m still going to try.

I’m wandering off into the weeds here when what I really want to do is tell you how much I enjoyed GHOST OF THE HARDY BOYS. If you’re a fan of that series or just like to read about writers, I give it a very high recommendation and I’m glad it’s back in print.

By the way, my brother had another book I read that had an influence on me, an edition of THE LONE RANGER by Fran Striker (although we know now it was actually written by and first published under the author’s real name, Gaylord Dubois). But that’s a whole other story.

I also read this book a few years ago. Leslie McFarlane wrote a few novelets for Adventure in the 1920's and they were outstanding. I seem to remember that he talked about his stories for Adventure and Arthur Sullivant Hoffman, the editor. Then he went on to write the Hardy Boys, which I also loved as a child.

Yes, he writes quite a bit about selling his first story to Hoffman and mentions selling other stories to the pulps but doesn't go into detail. He actually sold close to 100 stories and was especially successful selling to Street & Smith, where his work appeared frequently in TOP-NOTCH, COMPLETE STORIES, and SPORT STORY.

I grew up reading the Hardy Boys and often wondered what a great detective series it would be having them as grownups. Guess we missed the boat, unless it's about their grandsons.

Like so many of my generation, I was a big fan of the Hardy Boys and read some 80-odd books available until the late seventies from a private circulating library (as these libraries were known back then). I didn't know that some of the books, even the early ones, were rewritten and not the originals. Back in my teens, I never bothered to read the copyright page.

My cousin had a complete set of the Hardy Boys books back in the 1950s. Once I read them (obsessively), I could never go back to the tame stories of Nancy Drew! Her adventures also have been rewritten for "modern audiences." Don't know whether the roadsters and chums remain.

I remember getting the McFarlane book when it first came out in hardcover, all those years ago.
As it happened, I lost that copy some while back (not as dramatically as you lost yours ...).
Reading your post today - with its link to Amazon - spurred me to action.
... And then I saw the older post about Dennis O'Neil's Shadow novel ...
So anyway, James - thank you twice.