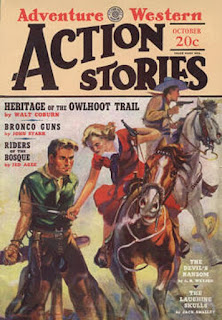 “The Devil’s Ransom”, a novelette from the October 1939 issue of ACTION STORIES, is considered the third story in the Stinger Seave series, but actually, Seave is more of a supporting character in this one. It’s an epic tale in which author Albert Richard Wetjen brings together several of his series heroes. Seave, Typhoon Bradley, Jack Barrett (Captain Hi-Jack), and Big Bill Gunther join forces to rescue an old friend and mentor of theirs who has discovered gold on a remote island in the South Seas. (I didn’t know there was gold in the South Seas, but okay, I can go along with that.) That old friend has been double-crossed and taken prisoner by a group of villains who have plagued our heroes in the past, and they’ve even brought in the German government and involved a German battleship in their evil scheme.

It takes an action-packed, Dirty Dozen-like mission to set things right. Typhoon Bradley is in command, and this is more his story than Seave’s. Bradley is an excellent protagonist, too. I’m going to have to see if I can hunt up more of the stories featuring him. In this case, everything works out quite satisfactorily, and I like the way Wetjen establishes connections between his various series. Someone needs to do a big reprint collection of these connected stories.

I’m halfway through the Stinger Seave stories now and plan to read the next one soon. They’re great for working in between bigger books and projects.