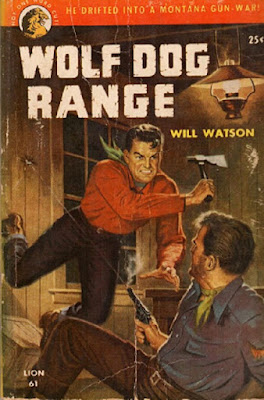 First of all, there are no wolf dogs in this book. There’s a town called Wolf Dog, as well as a river and a mountain range, but no actual wolf dogs. The novel was published originally in hardback by lending library publisher Phoenix Press in 1946. Then it appeared in the October 1947 issue of COMPLETE COWBOY NOVELS MAGAZINE with a great cover that I posted here on the blog a while back. I liked that cover enough that it inspired me to seek out a copy of the book. What I wound up with is the 1951 Lion Books paperback edition. That's my copy in the scan above. But like the pulp version, this cover is misleading, too, as no fight between a hatchet-wielding hombre and a fella shooting at him ever takes place in the book’s pages.

Now that we’ve covered that, what’s WOLF DOG RANGE actually about? It’s a range war story, as tough cowboy Pete Manly travels from Texas to Montana to answer a summons for help from Jeff Ring, the old-timer who raised him. Ring has relocated his ranch to Montana, and now the owner of the neighboring spread is trying to force him out. Ring is in financial trouble, too, because the local banker absconded with the deposits and left the old rancher almost broke. Pete figures something shady is going on, especially when some badmen hold up the train he’s coming in on, for the express purpose of murdering him. He survives that attempt, of course, and also makes the acquaintance of a beautiful young woman who’s also traveling to the town of Wolf Dog. (Why is everything in the area called Wolf Dog? Unfortunately, the author never tells us.) When he arrives, Pete sets out to get to the bottom of several suspicious happenings and prevent his old friend’s ranch from being taken over.

You can tell from that brief description that WOLF DOG RANGE is a very traditional Western novel. That’s not surprising, because the author, “Will Watson”, was really Lee Floren, who made a living for several decades by writing very traditional Western yarns for the pulps and for a variety of paperback publishers. Floren is a maddeningly inconsister writer. I don’t know much about his background, but when he’s writing about cattle and ranch life, his work has a ring of authenticity that at times rivals Walt Coburn. The long sequence in this book about a roundup carried out during an unexpectedly early snowstorm is excellent, as is the aftermath of a chinook wind that melts the snow. Floren’s action scenes are generally good to very good, too. Where his writing gets clunky is in dialogue and in the scenes were the characters are interacting without any gunplay or fisticuffs. Some of that is so perfunctory that it reads like scenes he outlined but forgot to flesh out. There’s too much of that in WOLF DOG RANGE.

And yet . . . there are some great characters in this book, including the old rancher’s Apache sidekick and a Chinese range cook who reminded me of Connie from Milton Caniff’s classic TERRY AND THE PIRATES. There are also some poignant moments that work really well. As I’ve mentioned before, I’ve never been a fan of Floren’s work and so I haven’t read that much by him, but without a doubt, WOLF DOG RANGE is the best of his novels that I’ve read so far, and I’m not saying that to damn with faint praise. It’s not without its flaws, but I found it to be a solidly entertaining traditional Western.

It could’ve used some wolf dogs, though. 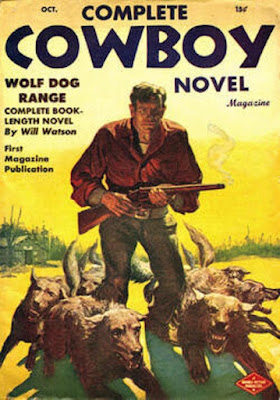 Hi James. I have what is, perhaps, and odd question or request. A little build-up… I read you blog week after week. They are great. I have read several of you books. Also great. And I have read many of your year-end wrap-ups. They break my brain a bit. For you to read 200ish books a year and write as much as you do… you gotta’ read very fast and write faster. Can you explain (or describe) a bit about how much time you spend each dear reading and writing on an average day?

That 200 books last year was really skewed by the fact that I read a lot of graphic novels. 10 to 12 books a month is much more common. I've always been a fast reader. I read for 20-30 minutes in the morning, another 20-30 minutes in the middle of the day (not every day, but often), maybe an hour in the late afternoon if I've finished my work for the day in time, and then a couple of hours late at night. Usually this is work-related reading (editing manuscripts on the Kindle), but I try to work in a little pleasure reading when I can.

My writing schedule used to be three hours in the morning and four hours in the afternoon, but since I took on the editorial job, finding time to write is now much more haphazard, just an hour here and an hour there when I can find the time.

Your comparison of Floren to Coburn is interesting. Floren, like Coburn, grew up in Montana. But he was a couple of decades younger than Coburn, who was one of the few cowboy authors to grow up on unfenced ranges. By Floren's time, homesteaders had moved in to farm, usually unsuccessfully. Floren was the son of one such homesteader from Minnesota and worked on the family farm into his 20s. Then he headed out to college, becoming a school teacher on graduation and then turning into a writer. He's familiar with the Montana locale, and it shows.

But he wrote too much too fast. In the 1950s he was turning out one paperback of 150 odd pages every month and continued writing into the late 1970s. Not much time for character or plot development and it shows. Many of his novels might have been better off as pulp novellas.

Thanks for the background on Floren, Sai. I didn't know much about him at all. Here's a 1963 newspaper article I found about him:

I was surprised to see on another site that he didn't pass away until 1995. I figured he died earlier than that.