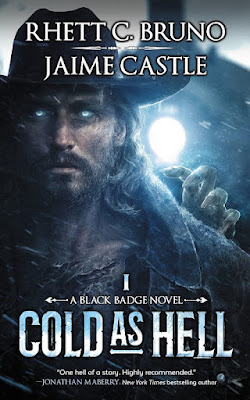 The Weird Western is an odd subgenre, and I don’t just mean the subject matter. Robert E. Howard invented what we think of as the Weird Western in stories such as “The Horror From the Mound”, “Old Garfield’s Heart”, “For the Love of Barbara Allan”, and “The Man on the Ground”. Adding horror elements to traditional Western tales can be very appealing to writers. You’re getting to play in two different sandboxes at the same time. However, they’re tough sells to many Western readers, who don’t want even a hint of the supernatural in what they read. That’s why a lot of Westerns that seem to have supernatural elements wind up explaining all that away in Scooby-Doo endings. I’ve done that several times myself. My hunch is that Weird Westerns are more likely, overall, to find their audience among horror and fantasy readers . . . who, in turn, may be put off by the Western stuff.

All that said, it is indeed possible to write a novel that’s both an excellent horror/fantasy story and a solid Western yarn. That’s exactly what Rhett C. Bruno and Jaime Castle have done in COLD AS HELL, the first novel in their new Black Badge series, that mixes truly creepy horror and fantasy elements with a well-done, believable Western setting and characters.

Former outlaw and gunfighter James Crowley is a Black Badge, an undead avenger working for Heaven with an angel who sends him on missions to battle demons and monsters plaguing the frontier. As COLD AS HELL opens, he takes up the trail of a trio of bank robbers who seemingly have supernatural abilities. He runs into plenty of other dangers before he tracks them down, and there’s no Scooby-Doo ending to any of this. Crowley and his enemies and allies are the real deal.

He’s also a very good protagonist, tough and smart and not without flaws even though he’s basically unkillable, already being dead and all. Bruno and Castle aren’t afraid to pile up trouble on him, and then, in the end . . . there’s a very nice twist that sets up the next book in the series, which I’m already looking forward to. If you’re a Weird Western fan, COLD AS HELL is one of the best I’ve read in a long time, and if you’ve never tried one before, I think it would be a fine place to start. It's available in ebook and hardback editions. Highly recommended.

Would you discount Ambrose Bierce as a progenitor of the form? Not to steal too much fire from Howard. And even such dabblers who ran close to Howard's era as Henry Cecil's "Proof", a childhood favorite of mine.

And, of course, T. V. Olsen put me onto westerns even earlier with "The Strange Valley"...the first western story, by a western vet, I recall reading...

Bierce is certainly in the neighborhood, but his stories take place in the Civil War, which is a close cousin to the Western. Howard's stories are the first ones I can think of that mix horror with purely Western elements, such as "The Horror From the Mound" capable of being boiled down to cowboy vs. vampire.

I'm not familiar with Henry Cecil or "Proof", but I'm off to investigate! Thanks for the recommendation.