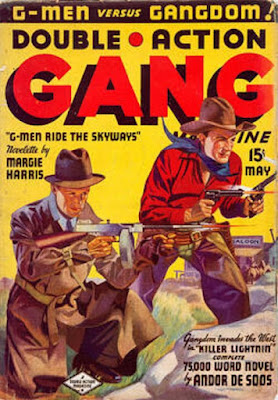 Here's an odd pulp cover for you, on the first issue of DOUBLE-ACTION GANG MAGAZINE, a short-lived gangster pulp. I have a feeling that they took a Western cover they had in their files (I'd swear I've seen that cowboy somewhere else) and added the guy with the Tommy gun to it. "Killer Lightnin'" by Andor de Soos sounds like a story I'd like to read. "Gangdom Invades the West" has a nice ring to it. Luckily, Adventure House has reprinted this issue, so I can read it. Also on hand in this issue are Margie Harris, a regular contributor to the gang pulps, and Abner J. Sundell, writing under his pseudonym Cliff Campbell, which later on became a house-name, as well as Harold Ward, probably best remembered for writing the Dr. Death stories under the name Zorro.
Posted by James Reasoner at 7:00 AM

It’s funny… yesterday, after your Saturday Morning Pulp post, I was thinking about the preponderance of flat yellow backgrounds on Western pulps (and more often than not, with bright red logos). I don’t know when or how or why it became such a popular trope, but at some point it definitely did. So much so that I wonder if editors of pulps of other genres deliberately avoided using flat yellow backgrounds on their covers, for fear that readers might automatically think it was a Western Pulp and pass it by (if they weren’t Western fans, that is).

I also casually tried to think of examples of Pulp covers with yellow backgrounds that WEREN’T Westerns, and I couldn’t think of many, off the top of my head. So of course today you print a Gangster Pulp cover with a yellow background…but it also has a Cowboy on it, too. So — you’re probably right, and the cover started as a Western cover, with the gangster added later. But maybe the editor decided the presence of a Cowboy on the cover would help boost the sales of the issue, and mandated the yellow background for maximum Western Pulp appeal?

Right … and Earle Bergey did a few THRILLING WONDER and STARTLING STORIES covers with yellow bg’s too.

Interesting
Thanks for this useful blog