The Spider: Scourge of the Scorpion - Will Murray 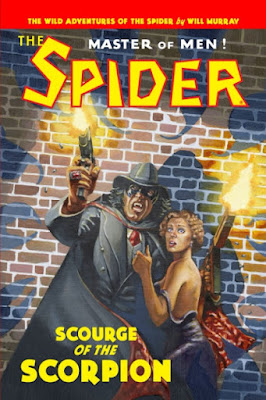 Will Murray is back with his third novel featuring the iconic pulp hero character The Spider, following THE DOOM LEGION and FURY IN STEEL. As in those earlier novels, in SCOURGE OF THE SCORPION Murray brings in some heroes and villains used in other Popular Publications pulps, making it clear that all of Popular’s characters existed in the same universe. This time he teams up The Spider with one of most obscure pulp heroes, The Skull Killer. The Skull Killer is obscure for two reasons: he was never the star of his own pulp but rather functioned as the hero in a couple of pulps that spotlighted the villains, THE OCTOPUS and THE SCORPION. There was only one issue of each, and it’s a common belief in pulp fandom that the lead novel in THE SCORPION was a rewritten yarn that was intended for the second issue of THE OCTOPUS, except the first issue sold so badly that the publisher thought a title change might be helpful. In fact, that may well be what happened.

But regardless of that, Murray comes up with a very clever way to tie together the mystery of The Octopus and The Scorpion and make something totally new out of their history without retconning anything. It’s an audacious approach that succeeds extremely well. I know something about working with other people’s characters and trying to find ways to make sense out of apparent contradictions, and it’s not always an easy thing to do. Murray pulls it off and does a great job.

And of course, he also captures the characters of Richard Wentworth (The Spider), Nita Van Sloan, Ram Singh, and the rest of the supporting cast perfectly. As for the story itself, it races along at a breakneck pace as you’d expect. The Cult of the Purple Eyes, led previously by both The Octopus and The Scorpion, is back, with The Scorpion still in command, and once again he’s turning innocent people into his mindless minions by a method that causes their eyes to change color and become a bright purple. He’s also infecting hundreds, if not thousands, of innocent New Yorkers with a deadly combination of scorpion venom and tetanus that causes them to come down with lockjaw. Wentworth’s faithful assistants Ram Singh and Jackson fall victim to this plague, and Nita Van Sloan is converted into one of The Scorpion’s purple-eyed zombies. Wentworth is left alone to battle against this horrible menace . . .

Oh, wait, he’s not, because The Skull Killer, who defeated The Octopus and The Scorpion the first time, is still around and teams up with The Spider to save New York City. But just when you think they’ve succeeded . . . things get worse.

SCOURGE OF THE SCORPION is a great pulp adventure novel with a very nice blend of shuddery horror and over-the-top action. At one point The Spider, being pursued by bad guys, hides out in a morgue, climbs into an empty drawer, closes it behind him, rolls over, and calmly goes to sleep. You don’t get much more badass than that. As I said, Murray’s plotting is excellent, and everything comes to a very satisfactory conclusion. I had a wonderful time reading this book, and if you’re a pulp fan in general, or a fan of The Spider (I have been for close to sixty years now, since the first paperback reprints), I give it my highest recommendation.