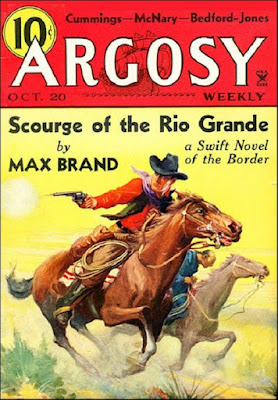 This action-packed novelette by H. Bedford-Jones, originally published in the October 20, 1934 issue of ARGOSY might just be the perfect mental palette-cleanser between novels. “The Deathly Island” refers to an island off the tip of Madagascar where a beautiful young woman is being held prisoner at her late father’s palatial estate. Sea captain Charles Stuart, our stalwart hero, discovers not only her plight but also the fact that his estranged brother is mixed up in the scheme that’s caught the girl in its snare. What’s a pulp hero to do but set out to put things right?

Not content to leave it at that, Bedford-Jones also mixes into the plot a truly despicable villain, a fortune in rare pearls, and a looming hurricane. The result is five chapters of action, suspense, and excitement rendered in the author’s usual clean prose with a cool, tough, hardboiled tone. The novelette length of “The Deathly Island” keeps Bedford-Jones from bringing in too many complications or going into too much depth with his characters, but the whole thing races along with such zest that it’s pure fun to read. If you’ve never sampled HB-J’s work, it wouldn’t be a bad place to start. And if you’re already a fan, I can almost guarantee that you’ll enjoy it. You can find it on-line, and I give it a high recommendation.