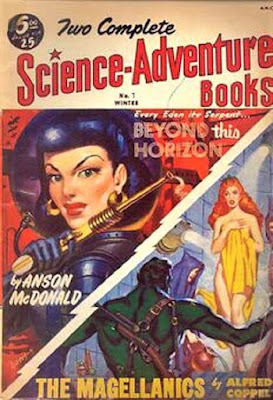 Eagle-eyed commenter b.t. spotted the similarities between this cover by Allen Anderson and yesterday's Western pulp cover that doesn't have any artist attribution. The pose and the gun make me believe that Anderson did indeed do at least half of yesterday's cover. With split covers like this, it's always hard for me to tell if the same artist did both parts. Anyway, this issue of TWO COMPLETE SCIENCE-ADVENTURE BOOKS features a reprint of a novella that was a classic already, despite being only ten years old: "Beyond This Horizon" by "Anson MacDonald" originally published in ASTOUNDING SCIENCE-FICTION in April 1942. By 1952, were there any science fiction fans who didn't know that Anson MacDonald was really Robert A. Heinlein? I suppose there could have been. The other story in this issue, "The Magellanics" by Alfred Coppel, is new. I don't think I've ever read anything by Coppel, or if I have, I don't remember it. Maybe I should, if his stories have sexy redheads in towels in them.
Posted by James Reasoner at 6:30 AM

"The Magellanics" is a grand space opera. It fits in with Coppel's "Warlord of Valkyr" universe. That is the story with star-ships transporting knights and horses between planets.

Alfred Coppel has a series about a galactic empire that goes down in ruin. There are star ships that transport knights and their horses to do battle. There are around3-4 in the series. "The Magellanics" is a grand space-opera. It would have made a good Ace Double.

Okay, those sound great. I'm going to have to look for them.

I think the series Morgan is talking about is the one beginning with “The Rebel of Rhada”, which Coppel wrote under the name Robert Cham Gilman. I have all four “Rhada” books sitting on my shelves but haven’t read them (yet). I HAVE read “The Rebel of Valkyr”, the original story that springboarded the series, and a few other Coppel yarns from PLANET STORIES. Been awhile, but I remember thinking they were enjoyable, if not quite “Brackett Level” top-tier Sword and Planet (but then, what is?)

Didn’t realize “The Magellanics” was related to the Valkyr / Rhada universe. Reason enough to pull it off the Pulp Shelves and slip it onto the tottering TBR stack. Also, I’m mildly curious to see if that Space Barbarian dude interrupting the lady’s shower actually has green skin or if it’s just some impressionistic Mario Bava lighting that Anderson added for otherworldly atmosphere….

I've ordered all four of the Rhada books. Of course, I could have just gotten the first one to see if I liked it, but my brain doesn't seem to work that way.

By Ishtar’s Jugs — nice to know I’m not the only maniac who does things like that :)

Just last week I fell down a weird Internet rabbit-hole and came THIS CLOSE to buying the entire set of MOD SQUAD tie-in novels by Richard Deming (in his “Max Franklin” persona) on eBay. The whole time, my ‘Rational’ side was saying, “Maybe just try one first, see if you even like ‘em”, which sounded like a good idea, but then I couldn’t decide which ONE to try, and you know that even “cheap” copies aren’t all that inexpensive when you factor in the shipping charges, so if you can find a reasonably-priced LOT, it’s better — and oh look, here’s a guy who has a lot of THREE of ‘em for only five bucks more than the cheapest single, and this guy further down has the other two for just twelve bucks and FREE SHIPPING, and besides, you know as well as I do that I may never even read ‘em, I just wanna HAVE ‘em, ALL OF THEM, wanna see their slim little spines all lined up on the shelf, I CAN’T HELP MYSELF…”

Finally, Mr. Rational slams on the brakes : “You haven’t seen an episode of that show in probably FORTY YEARS, dummy! And are you really THAT big a fan of Deming’s writing anyway?” So grudgingly, I ended up not getting any Deming Mod Squads, and life goes on. I do still have “Mod Squad Tie-in” bookmarked in case I change my mind later….

I read one Coppel story in an Asimov anthology when I was in middle or high school and liked it. He wrote other things than science fiction in his later career, although he never abandoned it. I have a copy of a novel he wrote entitled SHOW ME A HERO. I may have picked it up at that second hand bookstore in Abilene we visited during Howard Days a few years ago. It's about a group of commandos posing as part of a film crew in Libya who are going to try to rescue a dozen Americans held hostage in a terrorist camp. I haven't read it yet, but it looks like fun.

b.t., for what it's worth, I read all of those MOD SQUAD paperbacks when they came out and thought they were fantastic. They're original stories, not episode novelizations, and as I recall, they're a lot sexier than the TV show. I've never reread them, so I don't have any idea how they'd hold up, but teenage me loved them.

Keith, that was a great bookstore. I'm glad we were lucky enough to get that one last trip in as it was closing down. Not many stores like that left.

I was first aware of Coppel as the author of THIRTY-FOUR EAST, a best-selling techno-thriller in the early 70s. My mom read an abridgement of it in one of those Readers’ Digest Condensed Books compilations, and liked it so much she bought the full-length version in paperback. I read the first few chapters way back when, but it didn’t grab me. I might like it now…hmmm, I wonder if I still have a copy.

It’s true that he returned to SF later in his career, with a trilogy of big fat epic space operas called The Goldenwing Cycle. Tor cannily got exuberant, enthusiastic blurbs from people like Poul Anderson, Brian Aldiss, Gordon Dickson and A.E. Van Vogt to promote the first novel in the series. I’ve never read any of ‘em, but I do own all three because OF COURSE I do :)

I suspect the "Anson MacDonald" by-line was to indicate that what we have here is the text of the original magazine serial rather than the revised text of the book. I have this pulp but have never thought to compare the text to the book version (or even to the CBZ Astoundings that I have.