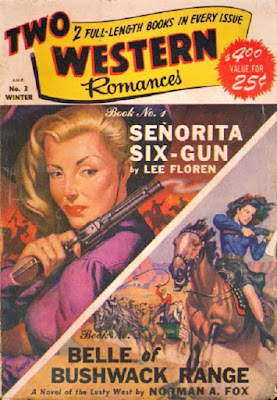 Sometimes I like these split covers, and sometimes I don't. I think this one from TWO WESTERN ROMANCES works pretty well. I don't know the artist for either picture. Given the pulp's title, it's not surprising that there are only two stories in this issue, both by popular authors: Norman A. Fox and Lee Floren. I'd say that Fox had the more successful career, with a number of his novels being made in movies and staying in print for a long time, but Floren was more prolific and was a steady seller in paperback for an even longer time. I haven't read a great deal by either author, but from what I have read, I prefer Fox. I plan to read more by both of them, however.
Posted by James Reasoner at 6:30 AM

I’m leaning towards Allen Anderson as the cover artist. The only thing that DOESN’T much look like his work to me is the face of the gal in close-up on the left half of the diagonal. However, the way she’s holding the pistol crossed over her shoulder is exactly like Anderson’s cover for TWO COMPLETE SCIENCE-ADVENTURES Winter 1952 — which does support my theory, even if it’s only ‘circumstantial evidence’.

Anderson did have a habit of occasionally re-purposing figures, poses and compositions in his cover scenes. Leigh Brackett’s ‘Queen of the Martian Catacombs’ on the cover of PLANET Summer 49 returned as the ‘Kill-Gun Angel’ on the cover for LARIAT Spring 51, and the ‘Gun-Queen of the Spanish Grant’ on the cover of LARIAT March 50 became the ‘Witch of the Demon Seas’ for PLANET January 51.

Good catch! There are enough similarities that I think the cover is by Anderson, too. I'll use that TWO COMPLETE SCIENCE-ADVENTURE BOOKS as my Sunday Morning Bonus Pulp tomorrow.